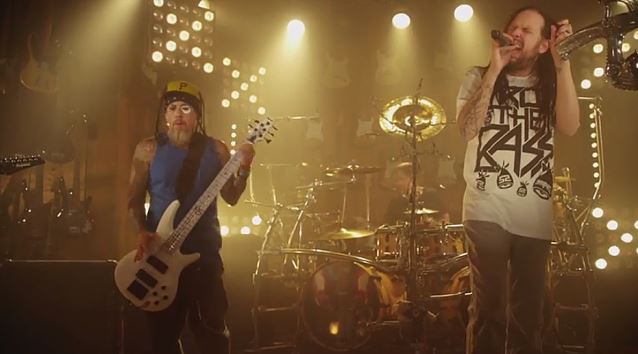 Video footage of the "Got The Life" performance from KORN's Guitar Center Sessions episode can be seen below.

"With 'Guitar Center Sessions', it all begins with the curation process. From legends like Peter Gabriel and Joe Walsh to buzzworthy up-and-comers like Gary Clark Jr. and FITZ AND THE TANTRUMS, this wide variety of musical acts creates a broad and unique musical journey simply unmatched anywhere on television," says Harcourt.

"With millions of viewers tuning in each month, it is clear that there is an audience seeking the type of quality music programming that has otherwise virtually disappeared from television in the past decade," says Dustin Hinz, director of music and entertainment marketing for Guitar Center.

"'Guitar Center Sessions' aims to fill that void while providing musicians with a world-class television platform that exposes their music to the masses, and inspires music enthusiasts and fans across the globe."

"Guitar Center and DirecTV have created a unique venue for these artists whereby the taping of these shows takes place directly on the premises at Guitar Center in Hollywood as they create a personal and intimate experience for our customers," said Christopher Long, senior vice president of original content and production, DirecTV.

"It's like a private concert and discussion that happens in your living room."

As part of its new agreement with AXS TV, encore performances from "Guitar Center Sessions" will begin airing on AXS TV this month, Monday nights at 9 p.m., bringing the series to a wider audience than ever before.

"AXS TV is committed to broadcasting a diverse slate of musical content that showcases today's top artists in some of the coolest settings and with interesting hosts. 'Guitar Center Sessions' with Nic Harcourt is exactly the type of series that will resonate with our audience as our channel brings music back to television,"

"Guitar Center Sessions" captures exclusive live performances and interviews from noteworthy and influential artists in stunning hi-definition and 5.1 Surround Sound in Guitar Center's iconic location on Sunset Boulevard in Hollywood. In addition to show-stopping performances, each episode features intimate interviews conducted by renowned journalist Nic Harcourt, offering rare insights into the celebrated careers of these icons and the inspirations behind their music. "Guitar Center Sessions" is but one example of the music retailer's efforts to support artists by creating new avenues to expose their music to large audiences in an ever-changing music industry.

"Got The Life" performance:

" Falling Away From Me" performance:

Behind the scenes of KORN's Guitar Center Sessions episode: