Fans who paid for VIP tickets for KISS's March 3 performance at the Tokyo Dome in Japan saw the band perform a mini unplugged acoustic concert during soundcheck which included a version of the 1962 blues song "You Shook Me", originally recorded by Chicago blues artist Muddy Waters and later covered by LED ZEPPELIN. Video footage of the performance can be seen below.

The full setlist for the acoustic concert was as follows:

KISS recently collaborated with the Japanese pop group MOMORIO CLOVER Z on a new single, which was released on January 28. The track "Yume No Ukiyo Ni Saitemina" was composed by KISS guitarist/vocalist Paul Stanley and Greg Collins, with lyrics written by Yuho Iwasato. MOMOIRO CLOVER Z performs the song, with KISS providing background vocals and instruments. It was released in two versions — "Momoclo Edition" and "KISS Edition" — via iTunes in 120 countries. A music video for the track, featuring both bands, was shot in Las Vegas.

Both the "Momoclo Edition" and "KISS Edition" of "Yume No Ukiyo Ni Saitemina" feature the title track and one same coupling song, but the "KISS Edition" includes the track titled "Samurai Son", which was made using "Yume No Ukiyo Ni Saitemina" as its base. It is sung by KISS while MOMORIO CLOVER Z members participate on vocals. The "Momoclo Edition" comes with a Blu-ray disc which contains the music video for the title track instead. 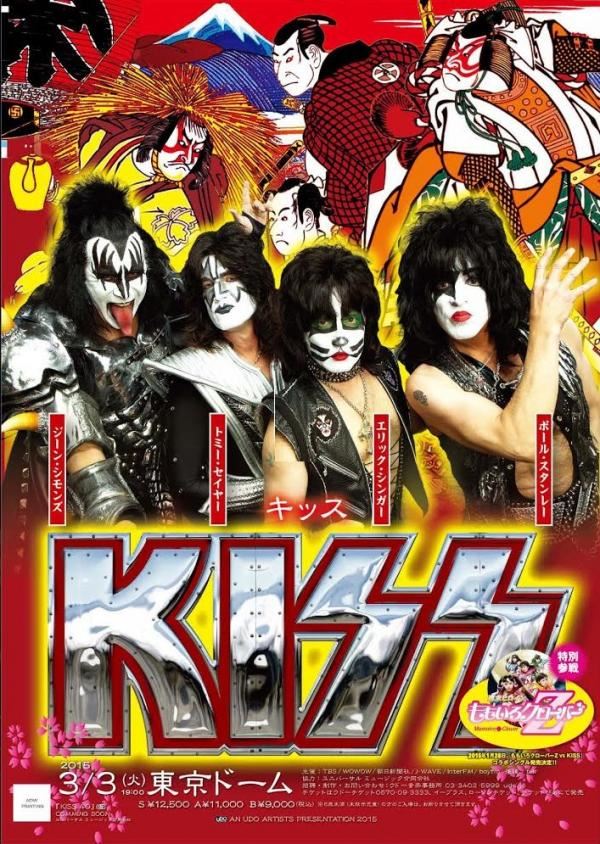