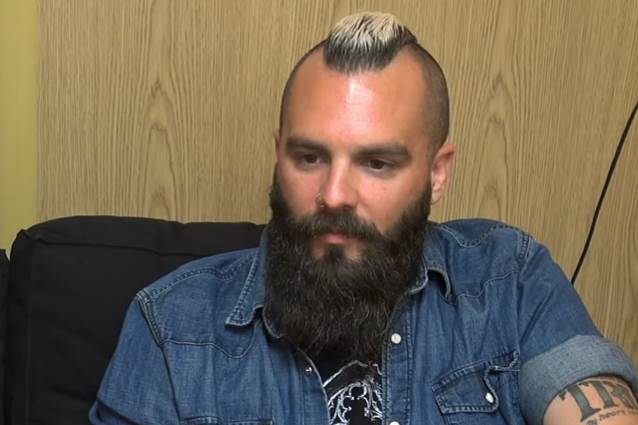 KILLSWITCH ENGAGE singer Jesse Leach spoke to Martin TheSwedishLad about the progress of the writing and recording sessions for the band's next album, tentatively due in early 2019. He said: "We've got 21 songs. I got into about seven before I had to stop and get checked out. And that's when I figured out I had to go have [vocal cord] surgery to cut off nodules. But that was a total blessing in disguise, because sitting with a [vocal] teacher, going through rehab and re-learning how to use my voice again, I know how to do it properly. Finally, after all these years of abuse, I know where the voice is supposed to be placed, and I feel like I'm singing better, I'm screaming better, and that's affected my mental health. So, yeah, it's been a hell of a trip, man, but everything happens for a reason."

Asked how KILLSWITCH ENGAGE manages to stay relevant after being around for nearly two full decades, Leach said: "I would say probably just we're genuine guys that play genuine music. We really love what we do, and I think that shows; fans can sense when you're being heartfelt and have passion. And we haven't lost it — we haven't lost that passion — and I think that shows through. And with the help of Adam [Dutkiewicz, guitar], who's a great producer, we write pretty catchy songs. And energy — I give it all on stage every night. Passion's my life. So maybe that's why. If we are relevant, that's why — it's genuine and it comes from the heart."

KILLSWITCH ENGAGE's next disc will be released via Metal Blade Records in the U.S. and Sony Music Entertainment in the rest of the world. The effort will feature a guest appearance on one song by the band's former lead singer Howard Jones.

The follow-up to 2016's "Incarnate" will mark KILLSWITCH ENGAGE's third full-length effort since the return of Leach, who rejoined the group in 2012.