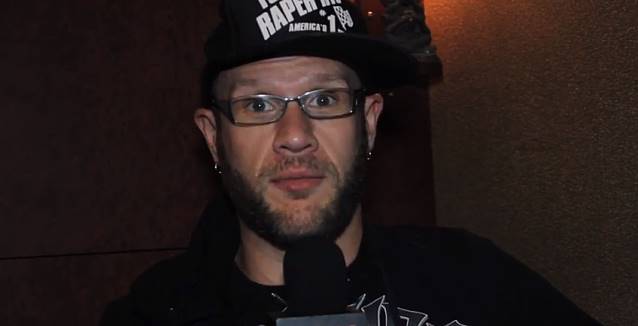 Robert Pasbani of Metal Injection conducted an interview with guitarist Adam Dutkiewicz of Massachusetts metallers KILLSWITCH ENGAGE before the band's October 25 concert in New York City. You can now watch the chat below.

KILLSWITCH ENGAGE's fifth studio album, "Disarm The Descent", sold around 48,000 copies in the United States in its first week of release to land at position No. 7 on The Billboard 200 chart. The CD arrived in stores on April 2 via Roadrunner Records.

"Disarm The Descent" is KILLSWITCH ENGAGE's first album with original singer Jesse Leach at the vocal helm since 2002's now-classic, genre-defining "Alive or Just Breathing". Leach returned to the band in January 2012 after a decade-long absence. The artwork for the new CD was created by bassist Mike D'Antonio.

In a recent interview with ARTISTdirect, Leach stated about "Disarm The Descent": "Mike D'Antonio thought up the title 'Disarm The Descent' even before I started writing. He approached me with a concept. Initially, it was 'Disarming The Descent'. After some discussion with him, I said, 'Let's just shorten it up.' I thought it was a great title. We talked about it a bit, and I wrote that at the top of the page and began writing notes from there. It's kind of a concept record."

He added: "[The title is] a creative way of saying 'redemption' or rising again. You're in a state of your life where you're approaching rock bottom and you find a way to pick yourself up again before you hit the floor."

Asked about his lyrical approach on "Disarm The Descent", Leach said: "This album is very different from anything I've written. That comes from trying to develop as a write over the year. I have a project called THE EMPIRE SHALL FALL. The last EP we put out was a total concept record where I wrote a short story and we made an album about it. It's broken down into three parts, and we finished one of the three. It's a continuing story that will tell a story from start to finish, word for word. I thought it was a cool idea because I'd never written that way. I mixed that idea with my own introspective and cathartic lyrics I did with TIMES OF GRACE. It's a culmination of the writing I've done over the years. I wanted to find a way to blend it all together. Vocally, I'm trying to come up with different sounds of my voice and mix the screaming and yelling. I made an effort to push myself with the writing and vocals."