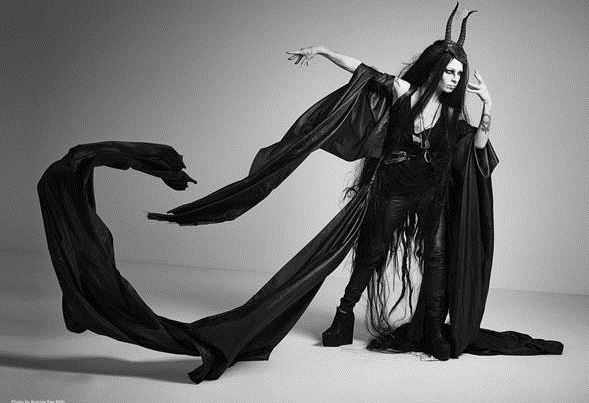 Karyn Crisis is a name worthy of more praise and attention. While select circles of people know and appreciate her prior vocals with the critically acclaimed CRISIS from 1993 to 2006, many are still naive to her influence and impact. This demure girl raged harder than many men, slugging it out with impactful live performances at hardcore and metal shows, screaming often times like a demon, other times singing like an angel. She led the way and has become an influence for female-fronted extreme bands. And then she disappeared. In the interim she made a name for herself as an artisan via her paintings and leatherwork, and now she's returned with KARYN CRISIS' GOSPEL OF THE WITCHES.

"This band began five years ago in Tuscany, Italy, as an alchemical journey between Davide Tiso and myself as we searched for a way to musically honor the Witches who came before me and who have been guiding me in Spirit, teaching me their Ancient Ways," explains Karyn.

The album was financed by fans via websites like Kickstarter and Etsy; then Karyn, together with Davide Tiso, Ross Dolan (IMMOLATION), Mike Hill (TOMBS) and Charlie Schmid (VAURA), recorded the 13 songs at The Basement Recording in North Carolina with producer Jamie King (BETWEEN THE BURIED AND ME, THE CONTORTIONIST).

Upon completion of the album, Karyn began shopping the album and reconnected with Century Media president Marco Barbieri, who had signed CRISIS back in 1993 when he worked at Metal Blade Records.

"In my opinion, Karyn is a true renaissance artist and I am intrigued by anything she puts her touch on," explains Barbieri. "She remains an undeniable icon in the annals of hardcore and metal with her vocal and live performances, and I am pleased that she has been re-infected by the muse and is sharing her undeniable talents again for longtime fans as well as a new generation.

"GOSPEL OF THE WITCHES is not CRISIS; it has her fingerprint all over it, lending an ear to early influences, but here she and her band take the listener on all sorts of new journeys and adventures musically, vocally and emotionally. I am proud to be working with Karyn again."

In closing, Karyn states, "I'm so excited to announce that I've signed a worldwide deal for my new band, KARYN CRISIS' GOSPEL OF THE WITCHES, to Century Media. Working out this new partnership is a testament to the enduring connections my art and voice have made throughout the years with industry people and fans who've continued to support me and encourage me to keep singing."