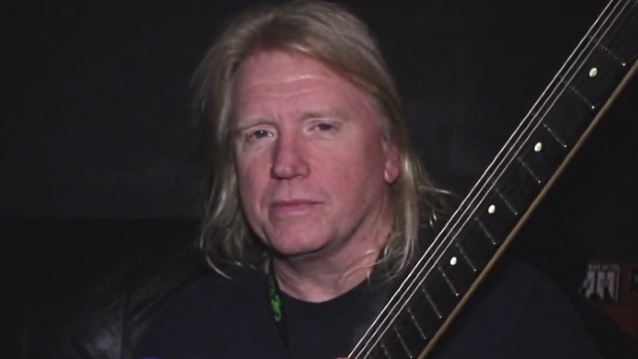 NILE guitarist Karl Sanders recently spoke with Aldo Guzman of Capital Chaos TV. The full conversation can be seen below. A few excerpts follow (as transcribed by BLABBERMOUTH.NET).

On the group's ongoing tour with TERRORIZER:

Karl: "So far, so good. It's going really well. The new songs seem to be going over particularly well. We've been playing three tracks from the new album — 'Long Shadows Of Dread', 'Vile Nilotic Rites' and 'Snakepit Mating Frenzy'. They seemed like the most conducive for the live setting, especially for people who might not be familiar with the record yet."

Karl: "I think this record is all about exploring what this new lineup is capable of. What is our potential right now? What can we do right now? Not what we did 20 years ago or 10 years ago — what can this group of guys do? I think the record's very reflective of that... On one hand, we are doing exactly what we love to do, so we're still true to ourselves. I think this new one, the approach to the songwriting is a little different. We've got a couple new guys, so there's a fresh attitude, a fresh energy. But it's not wholly dissimilar from what we've been doing for the last 20 years. If you're expecting it to be radically different in thematic content, it's still what NILE does — just maybe a fresh spin on it. Fans have a reasonable expectation if you've established your sound that when they go to listen to something new, they should still be able to relate to it. If you go too far astray, left or right, then you're playing with fire."

On the album's vocals:

Karl: "When we're working on the songs, we just kind of carve it up between us. One guy will go, 'I think I can do that.' Someone else will say, 'I can do this thing over here,' or 'Maybe we should do this together.' We just work it out."

On the group's increasingly technical sound:

Karl: "[I took] a lot of guitar lessons the last couple years. A lot of just playing guitar, every day, all day. The truth is, every time you turn around, there's somebody better. Every single town you go to, there are great guitarists. There's some guitarists in my hometown that play circles around me. I don't think it's necessarily [about] being the best. That's impossible, but you can be the best you can be. You can reach your own fullest, best potential."

On the band's worst touring experience:

Karl: "[Laughs] There's so many. We played this little bar and grill in Virginia, and it started off well enough, but some girlfriend of one of the local bands that was on the bill came into our backstage and started off with, 'My boyfriend is so drunk.' That should have been our first clue that shit was going to go south, but we had to experience that for ourselves. It was terrible. Not only was the boyfriend drunk, but she was drunk too. She got right up front and kept trying to spill her beer on me and on my stuff. I've got a lot of expensive pedals. She's right there in the front of the stage and we're trying to get going, and she's got the beer bottle [tilted] and she's leaning, half-drunk. You can see she's about to spill it, so I snatched it from her — took her beer right out of her hand. [I] thought it was over — thought that was the end of it. Two minutes later, there she is again with another beer — same long-neck, Budweiser-kind of thing. Same thing starts happening — she's leaning and swaying back and forth and about to spill it on me. I go to snatch it from her, and this time, she holds on... She starts pulling harder and harder, so I just say, 'Fuck it' [and let go]. That's when she goes 'Pow,' and busts her own lip open with her beer. I was like, 'Oh, man. I don't want nothing to do with this.' Next thing I knew, her boyfriend was coming out of the fucking woodwork. A ridiculous bar brawl broke out. We ended up not even playing because of this crazy bitch and her lunatic boyfriend."

On how NILE has shaped him:

Karl: "I've been playing in bands since I was, like, 16. That's a long way back. I'm 56 [now]. It's pretty much all I know and all I can remember. I don't remember what it was like to not be in a band... I really love metal. I really can't see myself doing something else. This is what I gave my life to. This is what I worked for. This is what decades of hard work and sacrifice was for, just to play music. To go do something else, why? That's another lifetime — not this one."

On an unexpected vocal influence:

Karl: "I noticed right away when I started doing vocals that my voice didn't sound like everybody else. I was listening to Tibetan monks quite a bit, and some of the things they do were very influential and pointed me in whatever path I've gone down."