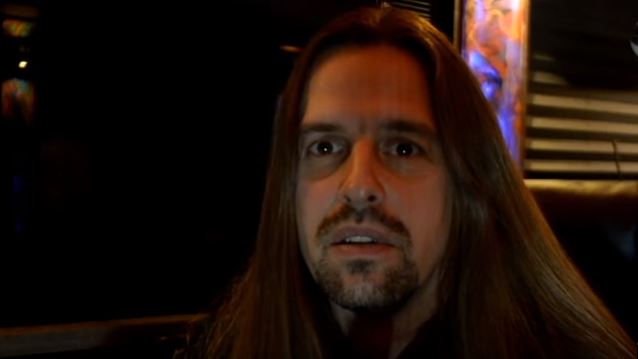 Sofa King Cool recently conducted an interview with KAMELOT keyboardist Oliver Palotai. You can now watch the chat below.

Speaking about the November 13 terrorist attacks in Paris and continued terrorist threats against France and Europe, Oliver said: "I heard about bands canceling their [European] tours, and, honestly, I don't respect that, 'cause I just don't see… It's exactly what these guys [the terrorists] want — these brainless idiots; they wanna put fear in our heads, and we just shouldn't go along. They wanna destroy our lifestyle, and I'm not up for it"

He continued: "I think the only good which comes from these really terrible things is maybe a little bit that we are torn out of our well-feeling, comfortable, luxurious society. And I think this is pretty isolated. If you look at the rest of the world, there are so many people for whom living with terrorist attacks is an all-day life since decades. Also in Germany, in the '70s and '80s, we had a terrorist group from the left-wing side. And look at Africa and the Middle East; there are so many people suffering from that. And maybe it's doing something good. Maybe it's doing some awareness for our lifestyle, how precious it is and also how fragile. And we've gotta protect it. And the show must go on."

Palotai did, however, express his desire to shelter and protect his child from the horrors of terrorism. He said: "I mean, there are things like, for example, we have in Germany these traditional Christmas markets. It's beautiful, you know. And my son is two years old, and I would like to bring him out. But this is my kid's life. This is the only thing… I go to the markets, I'm totally… I say, 'I wanna have fun.' But I would like to bring my kid. But in this case, I'm really scared about the little dude. I'm here for his protection, and there I actually have my thoughts."

89 people were killed at the EAGLES OF DEATH METAL show at Paris venue Bataclan, where when gunmen fired inside the venue and took concertgoers hostage. All of the bandmembers were confirmed safe after the attacks, but members of their crew were not so lucky. Merchandising manager Nick Alexander lost his life, as did Bataclan stage and lighting manager Nathalie Jardin.

On November 14, the French Government declared a state of emergency, closing the nation's borders and shutting down Paris' concert halls, movie theatres, museums and public spaces until further notice.

A number of artists halted their European treks in the wake of the Paris attacks, including LAMB OF GOD, FOO FIGHTERS, DEFTONES and others.

KAMELOT's new album, "Haven", sold around 7,600 copies in the United States in its first week of release.

The CD was made available on May 5 in North America and May 8 in the rest of the world (excluding Asia) via Napalm Records as part of an exclusive licensing deal through the band's Kamelot Music LLC.