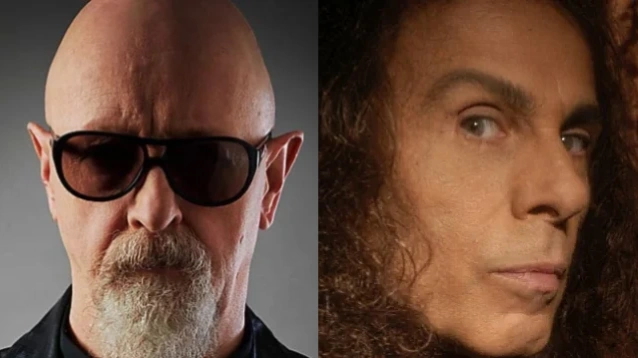 JUDAS PRIEST singer Rob Halford was the featured guest on BBC's "The Rock Show With Johnnie Walker" during the "Rock God" segment. Halford picked Ronnie James Dio and stated about his choice: "Every singer will have a story about a fellow singer who was an inspiration to them. One of my main inspirations and someone that still is, to this very day, an inspiration in my life in metal, as a metal singer, is Ronnie James Dio.

"I can't remember exactly when I heard Ronnie's voice, but I do know that the first time I did hear it, it was just like an electric shock, a bolt of lightning, because this voice had so much power and so much character and so much energy and so much of everything that makes a great singer," he continued. "So from that moment on, I was a huge Ronnie James Dio fan. And I followed his career from pretty much when he first came to [be known] throughout the world of rock and roll. The great things that he did with ELF, and then, of course, with RAINBOW and BLACK SABBATH [and] HEAVEN & HELL. What a great legacy Ronnie's left. It's all about the voice.

"Even now, I always blast some Ronnie before I go out on the stage, because he psyches me up — he gives me the essence of what a great singing performance should do. I just love listening to the man. Not only his voice, of course, but also his great work in helping other people.

"If ever a man was a rock god, for me, it will always be Ronnie James Dio."

Dio was renowned throughout the world as one of the greatest and most influential vocalists in heavy metal history. The singer, who was recording and touring with BLACK SABBATH offshoot HEAVEN & HELL prior to his illness, was diagnosed with stomach cancer in late 2009. He underwent chemotherapy and made what is now his final public appearance in April 2010 at the Revolver Golden Gods Awards in Los Angeles.

Halford released his autobiography, "Confess", on September 29 via Hachette Books.