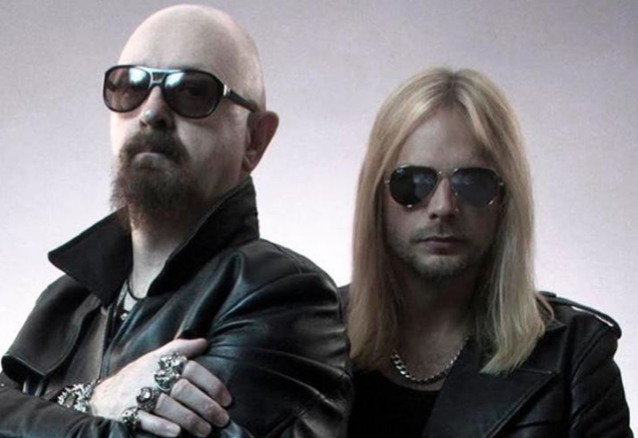 JUDAS PRIEST singer Rob Halford says that he is "still shook up" after guitarist Richie Faulkner suffered an acute cardiac aortic dissection during the band's performance at the Louder Than Life festival. Faulkner was rushed to the UofL Health - Jewish Hospital where the cardiothoracic surgery team needed approximately 10 hours to complete a life-saving surgery.

The 41-year-old had "an aortic aneurysm and complete aortic dissection" while performing the closing song of PRIEST's set on the final day of Louder Than Life in Louisville. Faulkner later said in a statement: "As I watch footage from the Louder Than Life Festival in Kentucky, I can see in my face the confusion and anguish I was feeling whilst playing 'Painkiller' as my aorta ruptured and started to spill blood into my chest cavity."

Halford told Consequence that he has not yet seen the video that showed Faulkner's health scare in real time. "I can't look at that yet," he said. "I'm still shook up, emotionally. Eventually I'll try to watch the footage, but [Richie] says in his own words when he looked at that footage he sees a dying man, which is basically what it was."

Rob continued: "It's just incredible that he got through that song and he came to the dressing room and he got changed. Even after the paramedics told him he needs to go the hospital and get a proper look at the stuff, he was like, 'Yeah, I'll be back. I'm going home for a couple days after this show, I'll see you guys in Denver' and walked out the door and then probably less than an hour later he was having over 10 hours of heart surgery. It's just unbelievable."

Faulkner, who is now resting at home in Nashville, spoke to reporters via a video link at the end of last week. He said about the final song of the Louder Than Life concert: "I became a bit light-headed. It didn't go away. I've never fainted before. I've never passed out, but I knew that this felt like I was going to pass out in a minute.

"Luckily, it was about half way into the song," he continued. "So obviously, I had to finish the song. If I had known how important it was, maybe I would have got off there a bit quicker. But I think that's the whole point for me. I had no idea whatsoever what it was.

Faulkner said that he experienced a sharp pain as he was stepping off the stage. "That's when it exploded," he said.

Faulkner also once again encouraged fans to learn from his experience and closely monitor their heart health.

"Listen, I'm 41 with no history," he said. "You could be the same. Go and get checked. Get in front of it if there's anything like that. If there's not, great. Take it from me: Just go and get yourself checked out."