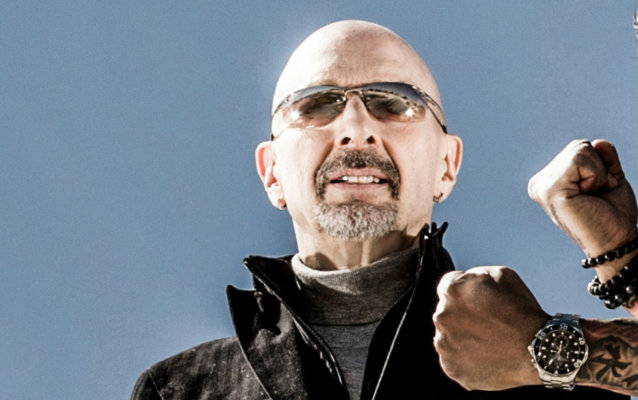 Steve Perry reunited with JOURNEY for the first time in years last month as they were inducted into the Rock And Roll Hall Of Fame. The iconic singer appeared onstage with his former bandmates as they each gave speeches, but did not perform with the group later in the event.

Asked in a new interview with Las Vegas Weekly what sort of interactions the members of JOURNEY had with Perry that day and that night, drummer Steve Smith said: "Whatever you saw on stage was it! [Laughs] I think some of the guys saw him backstage for a little bit, but I just saw him onstage. It was great to see him. It had been since 2005, when we got a star in Hollywood — that was the last time I saw him. So it was good to see him, and he was very gracious. I thought he gave a beautiful speech, thanking the band and the management and the fans. And also, he acknowledged [current JOURNEY vocalist] Arnel Pineda, which that was really a beautiful moment. It really makes it clear that he's passing the torch to Arnel — he's the lead singer in JOURNEY, and he's doing an amazing job. He's a tremendous singer and a really compelling frontman."

Smith was also asked what sort of discussions there were about having Perry sing with JOURNEY that night, and how far those talks got.

"There's really not much of a story there," the drummer explained. "We asked him if he wanted to sing, and he declined. He said no, but that he would be there."

During his Rock Hall acceptance speech, Perry praised each of JOURNEY musicians as well as, Pineda, who was not being inducted into the Rock Hall. "I must give a shoutout to a man who sings his heart out every night, Arnel Pineda," Perry said.

Perry concluded his remarks by thanking the JOURNEY fans, crediting them for "put[ting] us here." He added: "You're the rock and roll hall of fame! From my heart, I must tell you, I've been gone a long time, [but] you've never not been in my heart. Thank you so very much."

In addition to Perry and guitarist Neal Schon, Jonathan Cain, Ross Valory, Gregg Rolie and Aynsley Dunbar were inducted, as well as Smith, who's on his third run with the group.