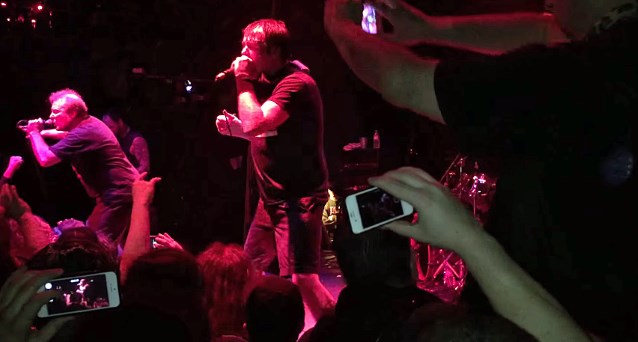 Legendary DEAD KENNEDYS frontman Jello Biafra joined NAPALM DEATH on stage on February 20 at the Oakland Metro Operahouse in Oakland, California to perform the DEAD KENNEDYS classic "Nazi Punks Fuck Off". Fan-filmed video footage of his appearance can be seen below.

NAPALM DEATH released its 15th studio album, "Apex Predator - Easy Meat", on January 27 (one day earlier internationally) via Century Media Records. The CD's striking artwork was created by Danish designer Frode Sylthe (Friktion.com), who has previously worked on the band's "Utilitarian" album as well as with such other acts as AT THE GATES, TOTALT JÄVLA MÖRKER, THE HAUNTED and BURST.

Asked if he feels that NAPALM DEATH is bigger now than it ever has been, the band's frontman, Mark "Barney" Greenway, told Metal Mark of SkullsNBones.com: "It's not just a feeling. I mean, we're selling more records right now than we ever have done. And that's not just vinyl. For us, it's vinyl, CDs… everything is selling really, really well. And when you consider, we haven't done anything to gain a commercial advantage. In fact, we turn down stuff that could gain us a commercial advantage, because of our ethos. I think then that's kind of mindblowing. It just goes to prove that you stick to what you wanna do and not what some things that you might not feel comfortable with. You live and die by your own decisions."