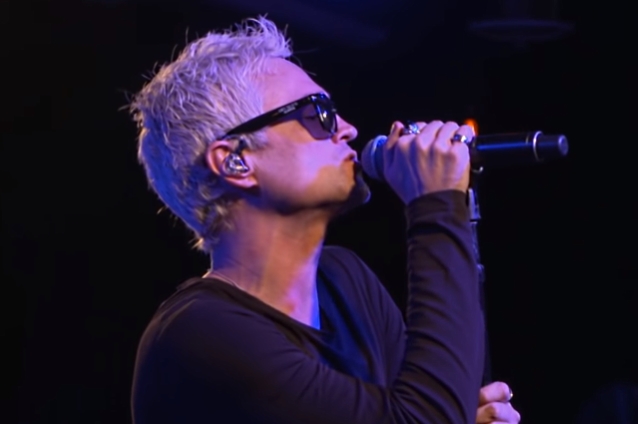 STONE TEMPLE PILOTS singer Jeff Gutt says that he is "honored" to be singing songs first made famous by the band's original frontman Scott Weiland and that in more recent years had been interpreted by Weiland's replacement, LINKIN PARK's Chester Bennington.

Gutt, a 43-year-old Michigan native who spent time in the early-2000s nu-metal act DRY CELL, among other bands, and was a contestant on "The X Factor", joined STONE TEMPLE PILOTS in 2017 after beating out roughly 15,000 hopefuls during an extended search that began more than a year earlier.

"Music's something I've done my whole life, and I just had to find a way to make it my own, do it my own way, obviously with their guidance and their experience and everything that I've gone through," Gutt said when asked by Australia's Heavy is he felt the pressure of following up Weiland and Bennington (see video below). "Following two singers like that, I don't really think about it too much. The only time I think about it is before I go onstage and I say a little prayer and I invite them to come with me, if they can. And I tell 'em they can't stay, but they can come join me for the gig. And I knew Chester — I didn't know Scott — but I knew Chester for a very long time. So, yeah, there's a lot of sadness there, but there's also a lot of rejoicing in what they gave us. So I'm honored to be the guy standing up there."

According to Gutt, he has been warmly received by the STONE TEMPLE PILOTS fanbase. "I just go out there and do what I do, and I think that comes across," he said. "After two songs, they're, like, 'You know what? He can sing…' You know what I mean? I think the most important thing is not trying to fake anything, 'cause I think people can see right through that — they can always see through a façade. And as long as I go up there and be myself — it wouldn't matter to me either way, but I'm glad that they're taking it well."

Calling his stint with STONE TEMPLE PILOTS a "dream gig," Gutt described the pairing as "like winning the lottery, but even better. Because you win the lottery and you spend the money. And this is a brotherhood. And it's something that I've basically almost done for free my whole entire life — I mean, not for free, 'cause I've had to play five or six nights a week just to pay my rent. And now I don't have to worry about that, and I get to just go out and have a celebration of music and try to become the artist I've always wanted to be. But also keeping it in the realm of what STONE TEMPLE PILOTS is and always was and always should be. We break new ground every day with certain things that we come up with."

Weiland, who reunited with the group in 2010 after an eight-year hiatus but was dismissed in 2013, died in December 2015 of a drug overdose.

STONE TEMPLE PILOTS and RIVAL SONS will co-headline a North American tour this fall. The 12-city tour will kick off in Baltimore on September 13, with stops in Philadelphia, New York City, New Orleans and more, before wrapping up in STONE TEMPLE PILOTS' former hometown of San Diego on October 9.

Gutt recently revealed that STONE TEMPLE PILOTS was working on an acoustic record.

The acoustic disc will be Gutt's second with STP after joining the band two years ago. His recording debut with the group was on its self-titled seventh album, which arrived in March 2018.