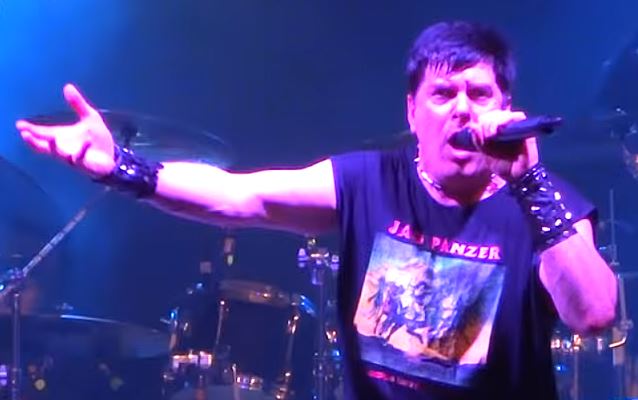 Veteran Colorado metallers JAG PANZER will enter the studio in May 2016 to begin recording their new album, titled "The Deviant Chord", to be released via SPV/Steamhammer.

JAG PANZER announced in August 2014 that it was looking for a new vocalist but has since been rejoined by the band's original singer, Harry "The Tyrant" Conklin. Conklin later wrote in an online post: "I never REALLY f-ing left. It's complicated!"

JAG PANZER performed at the 17th edition of the Keep It True festival in April 2014 at Tauberfrankenhalle in Lauda-Koenigshofen, Germany. The show marked the band's first appearance in Europe with guitarist Joey Tafolla.

JAG PANZER called it quits in July 2011, with guitarist Mark Briody explaining that they could not "move forward as a band."

Issued on February 28, 2011 in Europe and on March 8, 2011 in the U.S. via SPV/Steamhammer Records, JAG PANZER's latest album, "Scourge Of The Light", sold around 500 copies in the United States in its first week of release. The CD landed at position No. 117 on the Top New Artist Albums (Heatseekers) chart, which lists the best-selling albums by new and developing artists, defined as those who have never appeared in the Top 100 of The Billboard 200.

"The Scourge Of The Light" was mixed by Jim Morris at Morrisound Studios in Florida and was mastered at New York's renowned Sterling Sound.