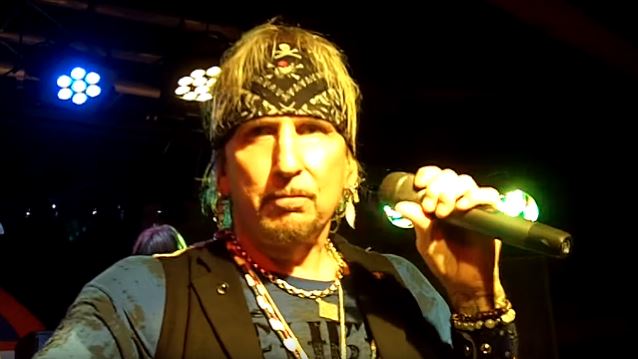 Former GREAT WHITE singer Jack Russell, whose pyrotechnics ignited the deadly blaze on February 20, 2003 at The Station in West Warwick, Rhode Island, killing 100 and injuring hundreds more, says that he will "never be over" the tragedy and plans to tell his side of the story in an upcoming documentary, which is currently in production.

"It's a story of my life intertwined with the story of the fire," Russell told Tanner of the 105.9 The Brew radio station in Portland, Oregon (hear audio below).

"It's really hard, you know, but it's gonna give me a chance to apologize and say how I feel about it. I never had the chance to say, 'I'm sorry,'" he explained.

"I was almost catatonic for three months. I couldn't stop crying. It was horrible.

"I'll never be over it, really, and I don't think I ever should. It's not something that you… I think I owe it to my fans that lost their lives to never forget them."

Asked how he feels about the entire incident now that more than a decade has passed, Russell said: "It was like the 9/11 of rock and roll. God, I mean, how do I feel about it? I'm just horrified. I feel a guilt. I have this survivor's guilt, like, why did I get to live when so many other people didn't? I feel guilty for people coming to see me play and losing their lives. It's really hard to deal with it. It's not like I had anything personally to do… It was just a horrible accident. It was a lot of weird things that had to come into play to make that happen. Like, the fire inspector didn't do his inspection. Or he did his inspection, but he did a faulty inspection. He okayed the foam on the ceiling that they had, which was mattress foam. And that's not legal, to have that up on anything. So the fire marshal didn't do his job right, but you can't indict a public official in the state of Rhode Island, so he didn't get in any trouble. They had a back door where there was a double door. They had a lot of sound complaints from the neighbors behind them, so what they would do is, during the inspection, they would take the second door off, so the push-to-exit door, in case of an emergency, that would open. But when they had concerts, they'd put the second door on, so when you push the emergency bar, the door wouldn't open; it pulled inward instead of pushing outward. And how anybody would know that. It says, 'Push to exit,' so you've got a hundred people in the hallway trying to push on this door, and it ain't going nowhere."

Regarding why he felt the time was right to tell his side of the story, Russell said: "I've wanted to get out and talk about this, from my perspective, but when all the legal stuff was going down, my lawyer said, 'Don't ever say you're sorry, because that's gonna imply guilt.' Well, this is where I get my chance to do that. So that's gonna be really important to me, and it's gonna be a great… maybe not total closure, but it'll give me some peace, you know, even if a little. Because those people, I knew most of 'em. I mean, I had friends that flew in unbeknownst to me. I had people that had flown in from L.A. just to see the concert. I'm, like, 'Why would you fly in from L.A. to Warwick, Rhode Island?' Without telling me they were coming in; they were just there to surprise me. And I didn't know they were there until their faces came up on the news."

Russell's bandmate Ty Longley (guitar) was one of the people who perished in The Station blaze, which became the fourth deadliest fire in U.S. history.

The fire at The Station nightclub in West Warwick began in an overcrowded club when pyrotechnics from Russell's GREAT WHITE ignited illegal soundproofing foam lining the club's walls.

In March 2012, Russell sued his former bandmates Mark Kendall, Michael Lardie and Audie Desbrow over their continued use of the GREAT WHITE name after Russell had taken a leave of absence from the band for medical reasons. The band countersued, and the parties were involved in contentious litigation for more than a year. After three days of closed-door mediation before U.S. Magistrate Judge Carla Woehrle, the parties reached a comprehensive agreement. While many of the terms of the agreement remain confidential, it was revealed in August 2013 that the current GREAT WHITE band would continue to use the name GREAT WHITE and Russell would perform under the name JACK RUSSELL'S GREAT WHITE.