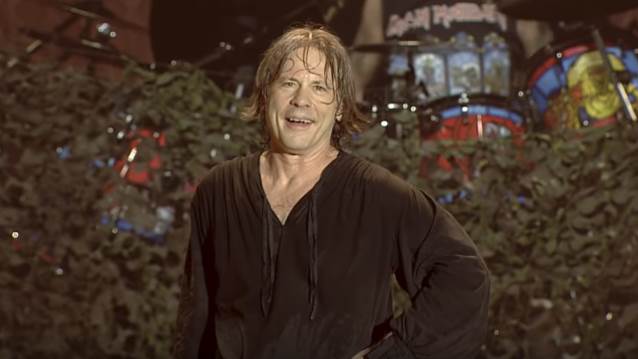 IRON MAIDEN singer Bruce Dickinson celebrated his 60th birthday last night (Tuesday, August 7) during the band's concert at Genting Arena in Birmingham, England. A one-minute video capturing the moment can be seen below.

Dickinson joined IRON MAIDEN in 1981, replacing Paul Di'Anno, and made his recording debut with the band on the 1982 album "The Number Of The Beast". He quit the band in 1993, pursuing several solo projects, and rejoined in 1999.

Dickinson has several other interests beyond music. He is a licensed commercial pilot and owns an aviation company. He has written other books, done some acting and brewed beer.

In 2015, he completed a round of chemotherapy for a tumor on the back of his tongue and was given a clean bill of health.

The concept for MAIDEN's current "Legacy Of The Beast" tour was inspired by the band's mobile game and comic book of the same name and the stage set design features a number of different but interlocking "worlds" with a setlist covering a large selection of 1980s material with a handful of surprises from later albums to add diversity.