Live Nation has announced that, following the rapid sellout of the IRON MAIDEN show at the L.A. Forum on April 15, 2016, they have been able to secure a second night there on Saturday, April 16, 2016, before the band fly off to Tokyo on Ed Force One on the following leg of their "The Book Of Souls" world tour. Tickets go on sale to the general public on Saturday, October 17 at 10:00 a.m. PST and can be purchased at Ticketmaster.com.

U.S. dates for the band went on sale nationally on Saturday with stunning fan reaction country-wide with Madison Square Garden selling out in 45 minutes, followed by the Forum, and with other dates fast approaching sell out some six months in advance of the shows.

Fan-club members will again be given the option of presales (and "First To The Barrier") on Wednesday, October 14 at 10:00 a.m. PST, details of which can be found at www.ironmaiden.com.

Select tickets will again be sold via Ticketmaster's Paperless Ticket delivery (also known as Credit Card Entry), which means fans will not receive a physical concert ticket for their entry into the event. Buying paperless helps ensure fans have secure and convenient access to event tickets at the intended original sale price. On the day of show, concertgoers just need to bring the credit card they used for the ticket purchase and a government-issued photo ID to the concert. All members of the ticket purchaser's party must be present at the same time to enter the venue. The venue's ticket usher will swipe their credit card upon entry and present each person in their party with seat locator slips for quick access into the show.

To purchase paperless tickets or for more information, fans should visit www.ticketmaster.com/paperless or call the Ticketmaster charge-by-phone number at 1-800-745-3000.

Due to IRON MAIDEN's schedule, no other U.S. dates can be added at this time, but dates in Canada go on sale on Friday, October 16 for Montreal, Toronto, Edmonton and Vancouver.

MAIDEN's sixteenth — and first-ever double — studio album, "The Book Of Souls", was released worldwide on September 4 through Parlophone Records (BMG in the U.S.A). The CD was recorded in Paris, France with producer Kevin "Caveman" Shirley in late 2014, with the finishing touches added earlier this year.

IRON MAIDEN announced in May that touring plans to support the album wouldn't happen until 2016 to allow singer Bruce Dickinson time to fully recuperate after his successful cancer treatment. 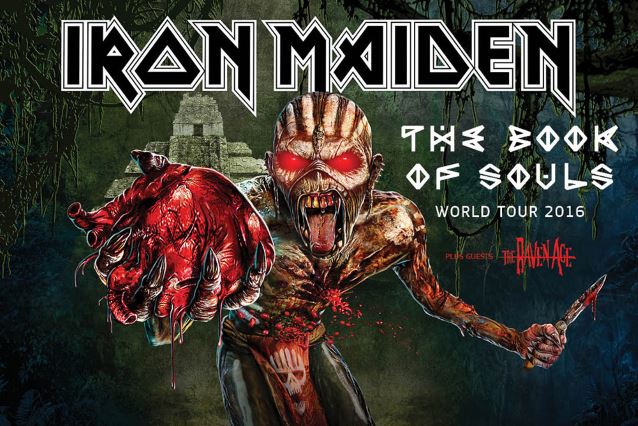