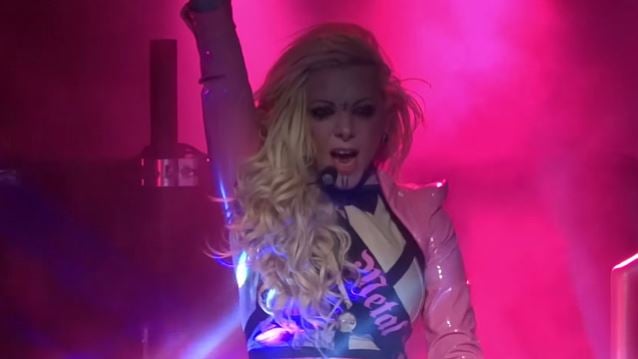 All The Rage TV recently conducted an interview with IN THIS MOMENT vocalist Maria Brink and guitarist Chris Howorth. You can now watch the chat below.

Speaking about IN THIS MOMENT's musical and visual evolution on the band's latest album, 2014's "Black Widow', Howorth said: "Basically, the album before 'Black Widow', 'Blood', was kind of a rebirth for us. We had lost a couple of members of our band prior to doing that album, so it basically just [Maria] and I, [trying to figure out], 'What are we gonna do?' And with that kind of feeling of our backs against the wall, we created 'Blood', which had a completely different sound for the band, took us to a new place. We stepped up our production and our look, and everything changed."

Added Brink: "It was a definitely like we reinvented ourselves, because it was like that 'do or die': Do we break up or do we completely reinvent ourselves and just let go of our fears and all of these things that we've been letting hold us back and putting all these boundaries on ourselves? We're just gonna do everything and try everything that we ever wanted to; [that] type of thing. And 'Black Widow' is an extension of the last album in that way. We kind of put no rules on us anymore."

She continued: "I love conceptual art and artistic expression. And, like I said, when we did 'Blood', we started just kind of having that freedom within ourselves. And we not only did it musically, but for our show. We always wanted to have this big show. So we just kind of started doing little things, like building our own little props, and starting to put on a show. And we just started seeing the response, and it felt amazing to us, and then I fell in love with it."

"I want us to have just one of the biggest shows in rock and roll. You know, there's so many great bands out there, visual bands, that we have to do something that makes us individual, and makes us stick out from everybody else, and something that is even bigger than just the music. Like, it's a show, it's something that… Even if you don't like us, you'll probably stay and watch our show. Even if you don't like the music, because [the show] is captivating. So we try to make the visual just as powerful as the music."

"Black Widow" sold around 36,000 copies in the United States in its first week of release to land at position No. 8 on The Billboard 200 chart. The CD arrived in stores on November 17, 2014.

IN THIS MOMENT in 2013 inked a new deal with Atlantic Records, a division of Warner Music Group, following the completion of its contract with Century Media Records.