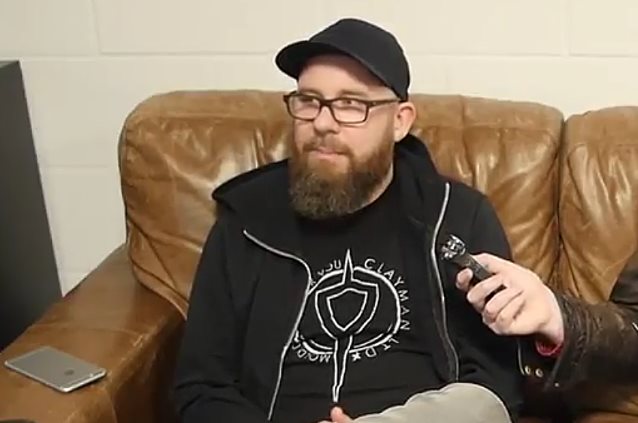 Tudno FM's Andrew Welsh conducted an interview with vocalist Anders Fridén of Swedish metallers IN FLAMES backstage at the Manchester Arena on January 16, ahead of the band's support slot with DISTURBED and AVENGED SEVENFOLD. You can now watch the chat below.

Asked for his opinion of streaming music services like Spotify, Anders said: "I think it's a great service. You can argue with the [size of the] payment [to the artists and the songwriters] — whatever — but that's just the way it is. It's there; it's nothing we can change. From a consumer point of view, it's not much money for what you get — that big, big, big, big collection of music. It's a good service, I guess. But then, from a band's point of view, maybe we don't get paid enough. But it is what it is, and we have to adapt. Either you're with them, or you say you won't [have you music available on Spotify]. And I'd rather want our music to be there, so the fans can take part in it."

The vocalist added that some music fans may hear an IN FLAMES track on Spotify and then go buy one of the band's albums. "And then come to a show," he said. "And buy a t-shirt. And maybe become fans."

He concluded: "That's the age we live in."

Anders's latest comments echo those he made last year to Musik Universe. He stated about Spotify at the time: "I mean, it depends on how you look at it. It's like radio — you have it straight in your pocket. I think it's great. We have to adapt. Personally, I wanna have something and hold it; I love vinyl still. But I think it's a good complement. And that's just the way it is these days. We, as musicians, have to adapt to the situation. Sometimes it takes away the fun of releasing something, 'cause it's out already everywhere. When I was younger, I had to wait and wait until the day the album came out and I went to the store and I got it in my hand, and it was a magical moment. But it is different these days. I mean, in Sweden we have… I think it's like eighty or ninety percent streaming and very few physical [sales] and very few iTunes even. It's like Spotify all over."

IN FLAMES drummer Daniel Svensson announced in 2015 that he was leaving the band to focus on his family life. He has since been replaced by Joe Rickard, who played on "Battles" as a session musician.

More recently, bassist Peter Iwers issued a statement in November saying that he was leaving IN FLAMES at the end of the recent U.S. tour "to pursue other endeavors." His replacement on the current tour is Håkan Skoger, who has previously played with PASSENGER and GARDENIAN.

"Battles", IN FLAMES' twelfth studio album, was released in November via Nuclear Blast/b> in all territories excluding North America and Scandinavia and Eleven Seven Music Group in the U.S.