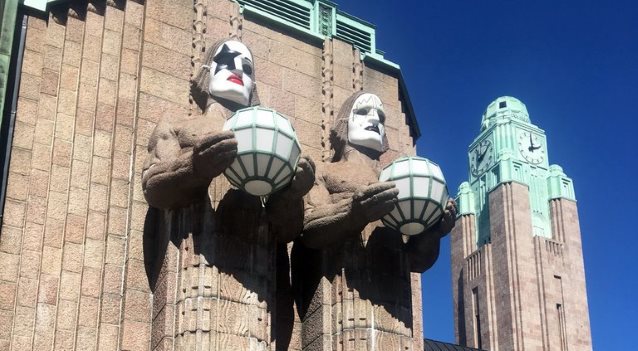 The fans won the chance to paint the large masks through cooperation with state railway company VR, Helsinki's Radio Rock and the local KISS fan club.

The masks will be removed the day after the concert, VR said.

KISS vocalist and guitarist Paul Stanley was so impressed with the promotion, he posed for a picture and posted it on Twitter with the caption: "At the Helsinki train station. Size counts! Such an honor."

KISS kicked off its month-long "KissWorld" tour Monday night (May 1) at the Olympijskiy Stadium in Moscow, Russia and has European dates scheduled through May 31 at London's O2 Arena.

Just how cool are these Men of Rock (get it, GET ITTT?!?) statues at Helsinki Railway Station with KISS masks on?!? pic.twitter.com/BO3P3FTQiA