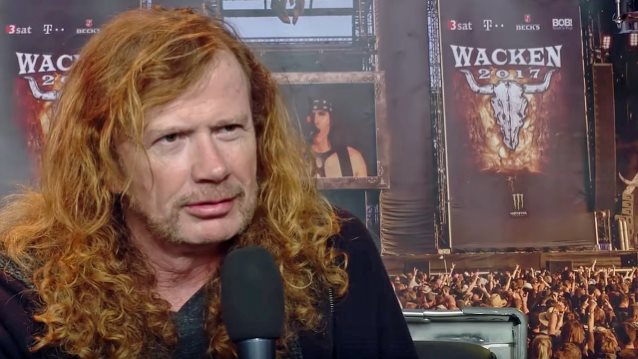 Rainer Maria Jilg of the German public broadcaster 3Sat conducted an interview with MEGADETH mainman Dave Mustaine on August 4 at this year's edition of the Wacken Open Air festival in Wacken, Germany. You can now watch the chat below.

Asked if it's true that MEGADETH was one of the first bands ever to have a web site, Mustaine said: "[We were] the first. The first band web site. The Internet was… [laughs] depending on who you believe, Al Gore says he invented it. I think he invented the sun too. But the web site we had was called Megadeth Arizona; it came out on October 31, 1994 with Capitol Records. This was so bizarre when we first got it and I saw what a chatroom was, I don't think I blinked for a week. I was typing and typing and typing… and typing and typing. And then people were doing these scripts where they would come into the chatrooms and stuff like… different band names and stuff. There was this one guy named 'Shit,' and he would go in there and type the word 'shit' and just 'shit shit shit shit shit shit.' And it was, like, okay, so we had to figure out how do you catch the frame, get his IP, block the IP."

He continued: "Here I am, I was a guy that was homeless and just beating on a guitar, and in a manner of a couple of fortunate decisions and being in the right place at the right time, now, all of a sudden, I'm at the forefront of innovation in music and how to communicate with your fans.

"We've really, really, really taken our fans, the fan club, the Internet social media, all that stuff, to the extreme," Mustaine added.

MEGADETH is planning on returning to the studio at the end of the year to begin work on the follow-up to the "Dystopia" album.

The Mustaine-fronted band recently toured North America with MESHUGGAH and will play arenas later in the year as the support act for German hard rock veterans SCORPIONS.

MEGADETH's upcoming effort will mark the band's first release to feature new drummer Dirk Verbeuren, who officially joined the group a year ago.

MEGADETH was honored with in the "Best Metal Performance" category in the pre-telecast ceremony at the 59th annual Grammy Awards, which was held on February 12 at the Staples Center in Los Angeles. MEGADETH was nominated for "Dystopia", the title track of its 2016 album.