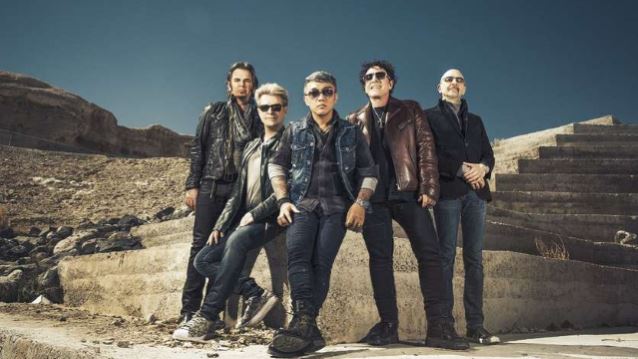 JOURNEY guitarist Neal Schon has commented on his war of words with Jonathan Cain over a White House visit by several members of the band.

While promoting this summer's JOURNEY-DEF LEPPARD North American tour Friday morning (January 19), Schon was asked by Albany, New York's Q103 radio station how he and Cain ended up being at odds over the latter's increasingly religious bent.

"It wasn't really a feud; I was stating an opinion and where we have come from before and the way we've conducted ourselves as a band," Schon explained. "And that's the honest-to-God truth.

"I've been here the longest out of anyone, and we always agreed never to mix with politics or religion, and so we all stuck to it," he added.

Schon, who appeared at points during his tweetstorm last summer to suggest that he might be reforming a new version of JOURNEY, told Q103 that he was feeling frustrated because he "wasn't able to talk to anyone inside the band and I wasn't able to talk to management about it." As a result, he "chose to take it to our audience and let the audience — my fans — chime in and tell me how they felt. And that was very interesting to read, because I found out afterwards I had close to 100 percent of the fans and they understood where I was coming from and that it was not just some little feud," he said. "It was something a bit more major than that."

He continued: "[JOURNEY is] a band that I started many, many years ago — at the end of '72 — and I'm the only member that's been here for this long and I've made all the right choices all along with all the members that have come and gone and chosen the people that have come in. And so to have somebody come in and just go, 'Hey, I'm gonna take your Lamborghini or motorcycle over here and I'm gonna go over here and do this, but I'm not gonna tell you about it,' I didn't think that was cool. That's the real deal."

Asked how he and his bandmates managed to come back from that low point last year, Schon said: "Well, we just don't talk. [Laughs] We're gonna let the music do the talking, like that old song.

"I'm here because of the fans, I'm here to play every year for the fans and for the great music that we've written, and the rest of it is just… People move in different places, and I can't help that," he said. "And so it is what it is. And I'll be there on stage kicking some serious butt."

Pressed about whether the JOURNEY lineup that will perform during the summer tour will be the same one that the fans are accustomed are seeing, Schon said: "As far as I know, yeah," before bursting into a laugh.

Neal is the only remaining original member of JOURNEY who has appeared on all the band's albums.

JOURNEY's 58-city tour with DEF LEPPARD will kick off on May 21 in Hartford, Connecticut. Tickets go on sale beginning Saturday, February 3 at LiveNation.com.