California metallers HIRAX filmed a video for the song "El Rostro de la Muerte" ("The Face of Death") on January 30, 2010. A photo from the video shoot can be viewed below.

"El Rostro de la Muerte" is a dual-studio effort, combining the skills of two HIRAX producers which the band has worked with on their past three releases. The ten new tracks were recorded and engineered by John Haddad at Trench Studio in Corona, California, and mixed by Andy Haller. The new CD also contains one bonus track from the "Chaos and Brutality" EP, which was previously unavailable in the U.S.

"The combination of Haddad and Rosen's recording and production are perfect for the vision that we had for the sound of this album," said Katon W. De Pena. "We worked with Haddad on the last two HIRAX EPs, 'Assassins of War' and 'Chaos and Brutality'. He has a great understanding of the power and speed of HIRAX, and he knows how to bring the best of our talents to the surface. We have a lot of respect for him. HIRAX first worked with Michael Rosen back in 2004 on 'The New Age of Terror' album and it's great to be working with him again. His experience in mixing and production are what we need to complete the mega-epic sound that we are striving for. It's the first time HIRAX has ever brought two of our producers together, but it seemed like the logical thing to do since they both have an ear for detail and a certain work ethic which brings out the best in the band. Musically, it combines everything that HIRAX is known for and much, much more! TRUE THRASH METAL!!"

"El Rostro de la Muerte" was released on Black Devil Records and Deep Six Records and is distributed through CMDistro.com. It was pressed in CD and vinyl formats as well as a limited-edition picture disc.

The HIRAX title "Not Dead Yet" (the band's two classic thrash metal albums "Raging Violence" and "Hate Fear And Power" together) is now available digitally through iTunes, along with "Thrash and Destroy", "Assassins of War", "The New Age of Terror", and "Barrage of Noise". 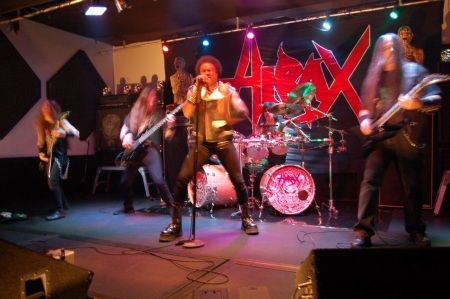