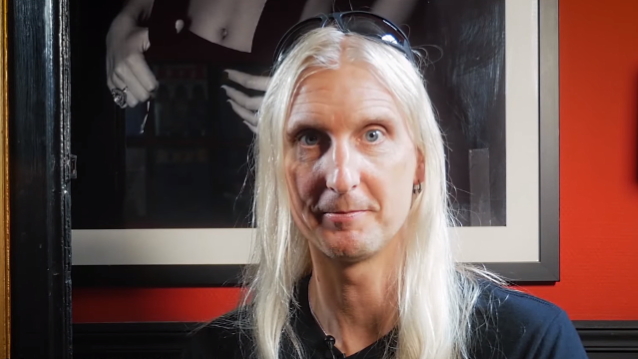 In a recent interview with France's Duke TV, HAMMERFALL's Oscar Dronjak singled out one guitarist as a major influence on his playing and songwriting style. He said (see video below): "One guy who, without me listening to him, I would not sound and play the guitar the way I do is Wolf Hoffmann from ACCEPT. He's my guitar hero, for sure. And not just the way he plays his guitar, but the way he writes the music, the songs, the riffs and everything. And the way he plays the lead guitar on top of the solos. Maybe sometimes it's a riff that sort of morphs into a solo. It's just fantastic guitar playing. So I really love his way of playing the instrument."

HAMMERFALL's latest album, "Dominion", was released on August 16 via Napalm Records. For the disc, HAMMERFALL re-teamed with James Michael to do vocals at Red Level Three studios, and Fredrik Nordström of Studio Fredman at Castle Black Studios for the instruments on the 12-song collection.

Dronjak told Loud TV about "Dominion": "It's one of those things where you have time finally to perfect everything. We didn't really feel that for [2016's] 'Built To Last'. It was stressed, the songwriting part of it. This time, we really felt ready when we started recording, which I don't think has ever happened. All the songs were where they should be. We had time to go back and let them mature. That made it easier to record. We are in a place right now as a band where we feel it's fun. It's happy, fun, because everything sounds good when we play live."

He continued: "I don't think HAMMERFALL has ever sounded better live than we do right now. That feeling, that rush translated into the recording. I think that's what you can hear on it. The songs sound the way they do, they sound, I think they sound perfected, in a way that I don't think the other albums may have done. It's an energy that we didn't have before. We always try to recreate the energy, but it's difficult to actually do it."