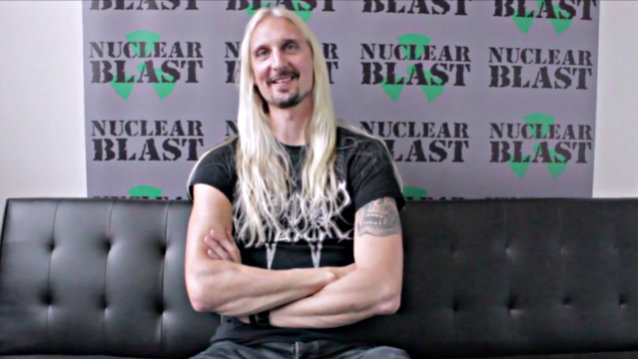 HAMMERFALL's new album, "(r)Evolution", will be released on August 29 in Europe and September 2 in North America via Nuclear Blast.

After taking a creative break last year, HAMMERFALL is fully recharged and back with a vengeance.

The first single from "(r)Evolution", "Bushido", was released on July 18 digitally as well as on vinyl. The song sums up the band and its history perfectly, seeing as "bushido" means "the way of the warrior" in Japanese.

Comments HAMMERFALL guitarist Oscar Dronjak: "This album has more single quality songs than anyone we've ever done before, as evidenced by the fact that pretty much the only single choice we all could agree on was 'Bushido'. It captures the essence HAMMERFALL as much as any other song we have ever written, and it is one of the absolute strongest efforts from our camp, ever. It's filled with energy, hunger and pure adrenaline, and if you don't like this one, you have no love for HAMMERFALL heavy metal!"

With "(r)Evolution", HAMMERFALL takes things back to the roots in many ways, as the band once again worked with producer Fredrik Nordström, who helmed HAMMERFALL's two milestone releases "Glory To The Brave" and "Legacy Of Kings" during the group's early years and thus played a major part in the development of HAMMERFALL.

The music for "(r)Evolution" was recorded in March and April at guitarist Oscar Dronjak's Castle Black Studios. Singer Joacim Cans then went to the United States for vocal recordings, once again working with James Michael (SCORPIONS, MÖTLEY CRÜE), who previously collaborated with HAMMERFALL on "Infected". The album was mixed and mastered by Fredrik Nordström and Henrik Udd at Studio Fredman.

"(r)Evolution" represents yet another reunion of sorts for HAMMERFALL, who hired cover artist Andreas Marschall, the "father" of HAMMERFALL's mascot Hector, to design the artwork for the new CD.