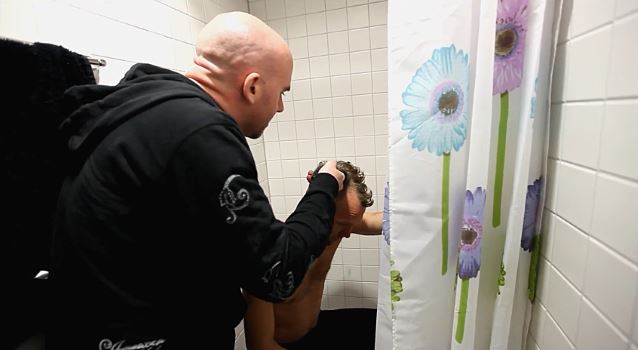 The fourth in a series of video blogs featuring behind-the-scenes footage from HAMMERFAL's "(r)Evolution" tour can be seen below.

HAMMERFALL's new album, "(r)Evolution", sold around 1,900 copies in the United States in its first week of release.

The band's previous CD, "Infected", opened with around 1,700 units back in 2011. The CD debuted at No. 16 on the Top New Artist Albums (Heatseekers) chart, which lists the best-selling albums by new and developing artists, defined as those who have never appeared in the Top 100 of The Billboard 200.

Regarding the band's new drummer, HAMMERFALL guitarist Oscar Dronjak said: "Pontus [Norgren, guitar] has known him for years; he's a good friend of Pontus from before. Joacim [Cans, vocals] and Pontus sat down with David and had a cup of coffee and just talked about it, and their gut feeling was to go with David. I didn't even meet him until we started rehearsing for the first shows in November — it was the first time I met the guy — but I trusted their gut feeling. And I think that was a wise choice. David is a great guy. He's really fun to have around, and he plays excellent drums. The drums make the sound of HAMMERFALL bigger and better. It's really, really cool having him as the drummer… We did a tour in Latin America; that was the first thing we did with him. It was an interesting time. If you don't know somebody, you don't know really what's gonna happen, but he fit really well into the group."