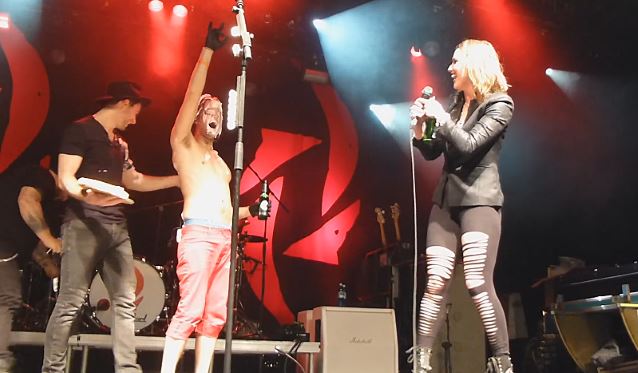 HALESTORM drummer Arejay Hale celebrated his 27th birthday on stage during the band's April 1 concert in Frankfurt, Germany. Check out footage of Arejay getting his face smashed in his birthday cake below.

HALESTORM plans to release a photo book called "To Hale And Back" in May. The book, for which the band teamed with photographer and longtime friend Rob Fenn, will document the group's career so far. Fenn has been traveling with the band since 2012 and a description of the book says that his pictures "capture HALESTORM at their most intimate, their most vulnerable and at their most triumphant moments via his trusty lens, and unwavering eye."

The 272-page hardcover photo book is also described as "the storybook tale of one young band’s rise to superstardom, as well as the build-up to their highly anticipated new album, 'Into The Wild Life'."

After its current European tour ends, HALESTORM will begin a North American jaunt with THE PRETTY RECKLESS on April 22 in Nashville.