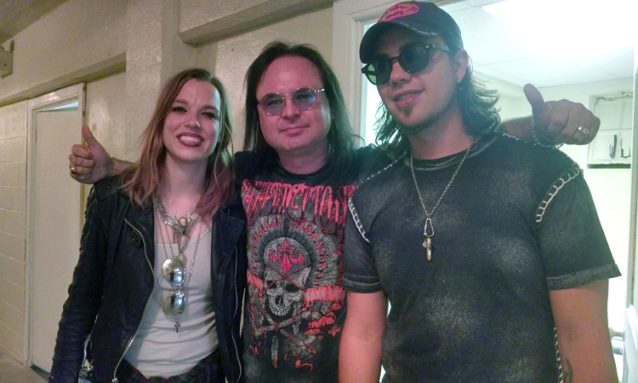 Vocalist/guitarist Lzzy Hale and guitarist Joe Hottinger of Pennsylvanian rockers HALESTORM were interviewed on the latest episode of the "Talking Metal" podcast. You can now listen to the chat using the audio player below. (Note: The HALESTORM interview begins around the 13-minute mark.)

HALESTORM will release its new EP, "ReAniMate 2.0: The CoVeRs eP", on October 15 via Atlantic.

The EP marks the acclaimed hard rock band's first new release since their stunning Grammy Awards triumph earlier this year, as well as the follow-up to 2011's "ReAniMate: The CoVeRs eP". As with its predecessor, "ReAniMate 2.0: The CoVeRs eP" sees HALESTORM putting their distinctive brand on a strikingly eclectic collection of classic songs, including legendary tracks by JUDAS PRIEST, AC/DC, PAT BENATAR, FLEETWOOD MAC, MARILYN MANSON, and DAFT PUNK.

"Like our first 'ReAniMate' EP, the songs included here are a collection of both our favorite songs and songs to challenge ourselves," said Lzzy Hale. We decided to go more 'bare bones' with this EP, meaning minimal production with live, gritty performances. We recorded this EP the week of the Grammys, so the excitement and debauchery you hear through your speakers is very real. We hope all our fans have as much fun with 'ReAniMate: 2.0' as we did!"

2011's "ReAniMate: The CoVeRs eP" contained covers of tracks from SKID ROW, LADY GAGA and GUNS N' ROSES. Singer Lzzy Hale told The Pulse Of Radio that recording other artists' songs helps her own writing. "There's just nothing like singing and playing and picking apart an already proven amazing song," she said. "I think it helps you as a songwriter. I'll write a song and be like, 'Well, is that as good as HEART's 'All I Wanna Do Is Make Love To You', and I'll have to be like, 'No, back to the drawing board.'"