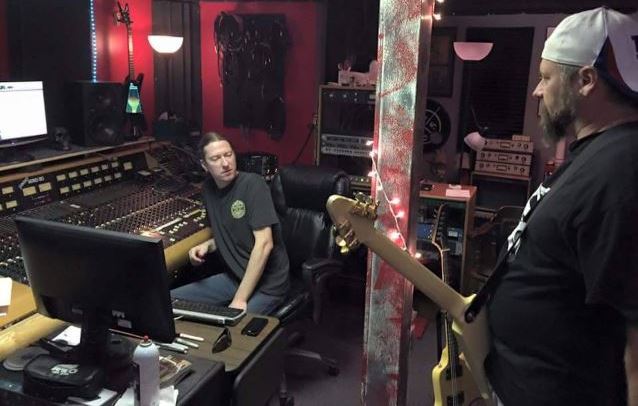 HAIL MARY, the project and the brainchild of former OVERKILL guitarist Bobby Gustafson, was formed for the purpose of writing, recording and releasing a single tentatively titled "To Hell and Back", with 100% of proceeds going to The Cheri Pogue Medical Fund.

After spending the month of December writing "To Hell And Back", HAIL MARY has started recording basic tracks at Blue Halo Studio with engineer Shawn Sanders and at The Porch Studio with engineer Tim Lau. No completion or release date has been set yet, and discussions are ongoing with various parties regarding the best method and format to release the finished song in.

Due to the recent loss of both Phil Taylor and Ian "Lemmy" Kilmister, HAIL MARY did an impromptu recording of a couple of MOTÖRHEAD songs and is currently considering the option of releasing one of those songs on YouTube.

On July 11, 2015, Cheri (Goodale) Pogue was enjoying a charity motorcycle ride with her husband, Steve Pogue (guitarist of INFECTUS 13, which also features former OVERKILL and BATTLEZONE drummer Sid Falck) and friends, when tragedy struck. Cheri was involved in an accident that severed her left foot. Eventually, her left leg was amputated below the knee.

Explained Gustafson: "I have gotten to know Steve and Cheri through Sid, and it absolutely broke my heart what happened to Cheri.

"Over the years, Sid and I have entertained the idea of doing something together again, but since we have both been busy with our own respective projects, the time was never right. However, I thought about it and felt…What could possibly be more special than to collaborate again on something that could help someone who has always been the first to help others? So I contacted Sid and told him what I wanted to do, and when the conversation came to whom else to ask, John's [Gallagher, RAVEN bassist/vocalist] name was the first that came to mind. Not only is John a pioneer in the NWOBHM, he is also a former labelmate, and an extremely talented musician and songwriter, so we contacted John, and he committed as soon as he heard why we wanted to do this "

Gallagher added: "I've known Sid since his BATTLEZONE days... We did a blues session back in the '90s, causing the producer much consternation by playing RAINBOW songs! When he approached me for this project, I immediately wanted in as it's for a damn good cause... And with Bobby on board, it's gonna kick ass! "