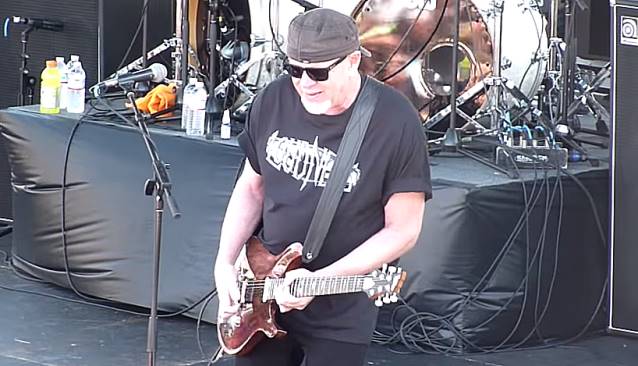 Guitarist Mark Kendall of the band GREAT WHITE, whose pyrotechnics ignited the deadly blaze on February 20, 2003 at The Station in West Warwick, Rhode Island, killing 100 and injuring hundreds more, says that he will "never forget about the people that were lost" that day and calls looks back on the entire experience and its aftermath as "unbearable" and "just pure unadulterated torture."

"We had all taken a break from GREAT WHITE, and I went and did a solo album and tour. Jack [Russell, GREAT WHITE singer] went out was doing a solo tour and, it wasn't going so well so the manager called me and I went out with his band, and that's when that accident happened.

"It was just unbearable. It was very tough to deal with being a witness to something like that."

He continued: "You know, GREAT WHITE have never used pyro. It wasn't truly GREAT WHITE that was there [playing that night]. I didn't know anyone in his band. I just went out to try to help with [Jack's] ticket sales. I had just met those guys, and they were just playing his music. I think they played 'Once Bitten, Twice Shy' at the very end of their show but they weren't playing GREAT WHITE material. When I came out, they started calling it 'JACK RUSSELL'S GREAT WHITE.' But on the posters, they had it just said 'GREAT WHITE,' and CNN and the press were reporting that, so everybody decided that it was just the classic GREAT WHITE lineup, but really it was just me just filling in with Jack's solo band.

"As far as the accident itself, it's the most horrific thing I've ever been through, and these days, I'm still on a daily basis in touch with a lot of people from Rhode Island.

"We're very, very close with the people that started the fund the Station Family Fund. It's an ongoing healing process and we all stay really close.

Asked if he thinks the tragedy affected people's perception of the GREAT WHITE name, Kendall said: "Not for the most part for people who know what really happened. The place where the accident happened, the accident report said they had what was equal to thirteen gallons of gasoline on their walls with this foam. They even allowed smoking of cigarettes in the building, so it was an accident waiting to happen. It just so happened that it happened on the night that we were there. But people who have read the books that they put out since, I really don't think that too many people blamed the band because they [the Station nightclub] had had pyro there several times before us. Just a couple of weeks prior to when we played there they had a KISS tribute band where the bass player was breathing fire like Gene Simmons. They were just lucky that nothing had happened then."

GREAT WHITE guitarist Ty Longley was one of the people who perished in The Station blaze, which became the fourth deadliest fire in U.S. history.

The fire at The Station nightclub in West Warwick began in an overcrowded club when pyrotechnics from GREAT WHITE ignited illegal soundproofing foam lining the club's walls.