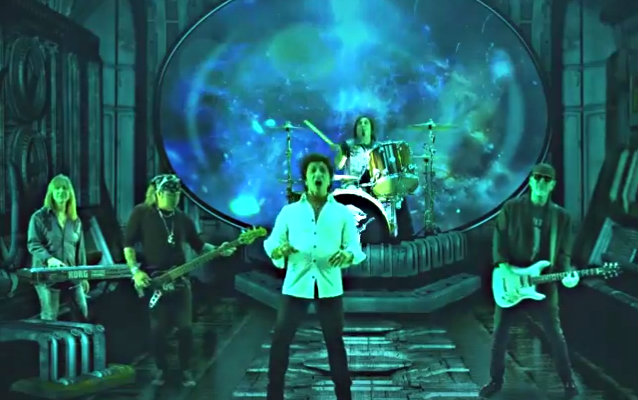 GREAT WHITE's new music video, "Complicated", can be seen below. The latest single from the band's "Elation" album is overflowing with rockin' guitar riffs, tight percussion, tickling keys, fresh vocal swagger and an infectious chorus. The boogie-blues track is signature GREAT WHITE through and through, soon to become a fan favorite.

The accompanying music video is a far cry from classic GREAT WHITE videos from back in the day. The band enlisted help from Mark Teague of Dream Haven Studios to create a multi-media narrative: a first for the band.

"We really had a good time making the video and we hope the fans dig it. They will feel the positive energy coming from the song and video," the band said.

Working alongside a green screen and even utilizing acting prowess, GREAT WHITE captures an emotional triumph. The energy and peace is palpable.

"Elation" sold around 1,000 copies in the United States in its first week of release. Issued on May 22, 2012 via Frontiers Records, the 12-song CD marks GREAT WHITE's first effort with Ilous following the band's split with founding singer Jack Russell.

This version of GREAT WHITE is not to be confused with GREAT WHITE FEATURING JACK RUSSELL (formerly JACK RUSSELL'S GREAT WHITE), which features Russell alongside Robby Lochner (FIGHT) on guitar,
Chris Tristram on bass, Tony Montana on guitar and Dicki Fliszar on drums.

To mark its 30th anniversary live on March 22, 2012, GREAT WHITE celebrated the only logical way — on stage. In a nod to its early days, GREAT WHITE returned to the infamous Sunset Strip, where a storied past of music's biggest fans are fused into the walls of the Key Club. GREAT WHITE delivered its entire repertoire to a packed house, pining for the band's raw energy and cheering its illustrious history track after track.