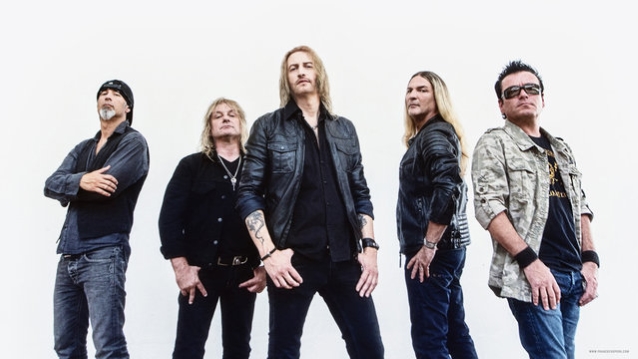 GOTTHARD has released a new video message from the studio for the attendees of the upcoming MetalItalia.com Festival, where the band will perform on Sunday, June 2.

GOTTHARD's most recent release was "Defrosted 2", a compilation of unplugged versions of the group's greatest hits, which was recorded a year ago on the "Defrosted" tour.

The band's latest collection of new material, "Silver", came out in 2017 via Musikvertrieb in Switzerland and internationally via PIAS. The CD was recorded at the Yellow House Studio in Lugano. The third disc with lead singer Nic Maeder was produced by Charlie Bauerfeind (HELLOWEEN, BLIND GUARDIAN) and Leo Leoni.

GOTTHARD's 2012 album, "Firebirth", marked the band's first release with Maeder, who was born in Lausanne, Switzerland, lived in Melbourne, Australia and grew up between Switzerland and "Down Under."

GOTTHARD's previous vocalist, Steve Lee, was killed on October 5, 2010 in what has been described as a freak road accident in Nevada.

Posted by Metalitalia.com Festival on Wednesday, May 1, 2019