Boston Boxing Promotions has announced that Sully Erna, lead singer for multi-platinum hard rock band GODSMACK, will take a on new role on Friday, August 16 at "Scars For Scars" — an evening of professional boxing to benefit The Scars Foundation. Erna will be a professionally licensed cornerman when two-time national PAL amateur champion David Tubbs makes his professional debut against Ranieri Souza in a four-round light heavyweight fight.

Erna, a boxing enthusiast who routinely works boxing into his fitness routines while at home and on the road, will be in Tubbs's corner along with trainer Joseph "Hoss" Janik of KnuckleHeadz Boxing in Ventura, California. Janik also trains current WBA super featherweight world champion Andrew Cancio along with several world-rated contenders.

"I recently met Sully through a mutual friend. We hit it off immediately," said Janik, a world-class trainer who is 2-0 working corners in world title fights in 2019. "I was impressed with Sully's knowledge and passion for boxing. I spoke with David and we agreed that with Sully's charity involved in the event, it would be great for him to join us to share some knowledge in the locker room and in the corner."

"Anyone who knows me, knows what a passion I have for boxing," said Sully when reached for comment. "I've spent the last 19 years training and learning from so many great coaches from Freddie Roach's camp, to one of New England's best boxing coaches, Julio Peña, right here in Londonderry, New Hampshire. So I'm extremely honored to have been asked to work this corner with Hoss. He's the real deal, and so is David Tubbs. Wait 'til you see him fight. It is going to be a phenomenal night of pro boxing."

The night is scheduled to consist of eight professional boxing matches and raffle items to benefit The Scars Foundation a charity established by Erna to raise awareness of mental health issues and provide resources and tools to educate and empower people on a global level that struggle with burdens such as bullying, addiction, abuse, depression and more.

GODSMACK's latest album, "When Legends Rise", was released last year. The current single from that album, "Under Your Scars", is No. 1 on rock radio in the United States. It is the band's third No. 1 rock single in a row from the LP and its tenth No. 1 rock single overall.

Boston Boxing presents "Scars For Scars", a night of professional boxing, on Friday, August 16 at Nashua Community College (1 Broadway, Nashua, NH., 02149). Doors open at 7 p.m. Tickets start at 40 dollars and are on sale now at this location.

Boston Boxing Promotions was founded in 2013 and is dedicated to the resurgence of professional boxing at the regional level, particularly in the New England area. Since that time, it has presented professional boxing events in places like Boston, Cape Cod, New Hampshire and New Bedford. 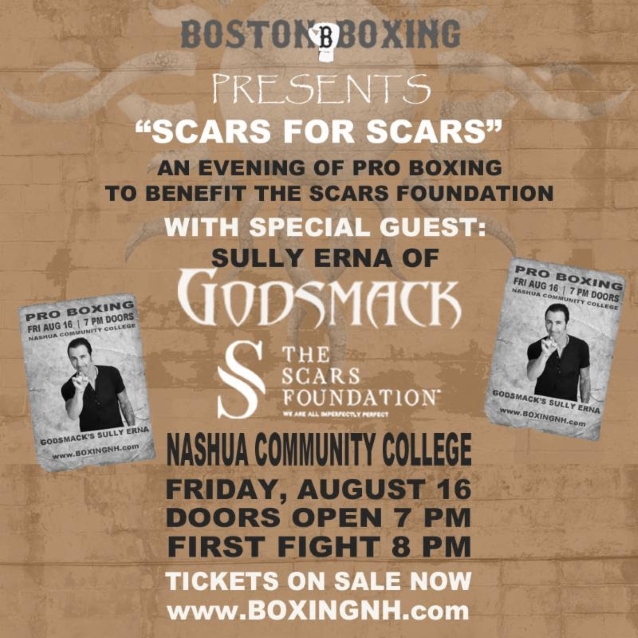