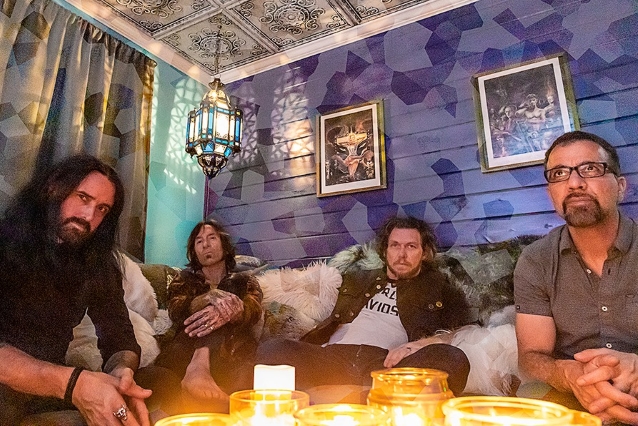 THE APOCALYPSE BLUES REVIVAL, the side project of GODSMACK drummer Shannon Larkin and guitarist Tony Rombola, has released its first song, titled "Can't Win For Losing".

THE APOCALYPSE BLUES REVUE evolved its mostly traditional sound from the debut album to the second release, and after writing a batch of six new songs, Shannon, Tony and bassist Brian Carpenter realized they had a unique and different vibe which called for a voice that would stand out stylistically and be more suited to the fresh sound they had discovered in the new writing sessions. So, they put THE REVUE on hold and tried out a new singer, Shane Hall (who sang for another project that Shannon and Tony were doing on the side for fun), and the four of them realized that the chemistry was there, with Shane's voice fitting new incarnation of THE APOCALYPSE BLUES perfectly.

THE APOCALYPSE BLUES REVIVAL stated about "Can't Win For Losing": "We had five songs that we demoed with Shane, and of the five, this one had the most 'APOCALYPTIC' sound (Tone's RIFF!) that we felt was in the pocket and aligned us with the earlier work yet showed a grittier, more blues rock sound with a couple spots for Shane to really show his personality. It's a pretty obvious blues lyric with the underlying story being of heartache stemming from a relationship that is crumbling, the confusion, paranoia, and self blame that one feels when having to decide what is more important — music or love — and the feeling of going insane when forced to choose. The dilemma is never solved in the song... and so 'I'll keep on playin' this sweet old song to set me free...'"

The news of THE APOCALYPSE BLUES REVUE's dissolution was broken by singer Ray "Rafer John" Cerbone, who blamed the group's breakup on scheduling conflicts.

Hall has been Larkin's drum tech for the better part of 20 years and previously played with him and Rombola in a funk band. Larkin remarked: "We did it for fun for many years, recording over 30 songs together (never released one song or did one show!)... [Hall] loves and grew up on all the same music as me, and has a style and flair that is undeniable."