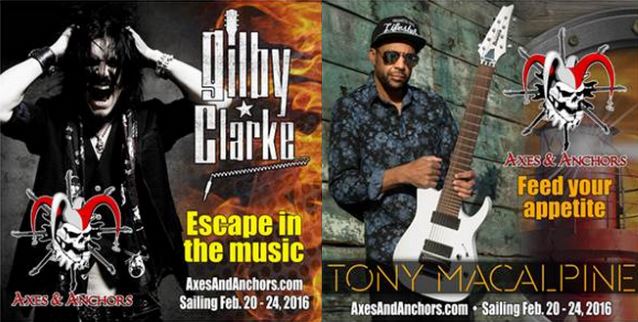 The upcoming five-day/four-night 2016 Axes & Anchors cruise — setting sail from Miami, Florida on February 20 aboard the Carnival Victory, stopping in Key West, Florida and Nassau, Bahamas, and docking back in Miami on February 24 — has announced two new artists to the cruise lineup. Gilby Clarke, best known for his time as rhythm guitarist for GUNS N' ROSES, and Tony MacAlpine, one of rock's most amazing and versatile musicians, are just two amazing artists that Axes & Anchors cruise will be adding to the already stellar lineup.

In addition, the cruise is announcing a variety of non-guitar oriented workshops for music fans and musicians of all backgrounds to enjoy. Musical education and teaching is very important to the Axes & Anchors mission. Whether you are a vocalist, bassist, drummer, photographer, tour manager or just interested in learning more about music in general, you'll have much to enjoy on the Axes & Anchors cruise. In addition to the guitar workshops run personally by 10 of the cruise's attending guitar gods, beginners and seasoned musicians alike can experience workshops like:

Ann Squire, co-founder of Axes & Anchors, comments: "We've had passengers calling and telling us how excited they are that we are offering workshops, and they are even asking for other very specific workshops — like voice training and sight reading — so while we are focused on guitars, we are also providing something for everyone. It's exciting to see everyone so jazzed about our new format for rock cruises."

Clarke will perform two full concerts with his band, and also offer a one-hour guitar workshop, and a photo op with each passenger!

Clarke states: "I'm so happy to announce that I'll be taking part in the inaugural Axes & Anchors cruise, setting sail in February 2016. I can't wait to get out on the high seas and perform for deserving fans and enjoy all that the cruise has to offer."

MacAlpine will also perform two full concerts with his band, conduct a one-hour workshop, attend the rocktail party for Platinum VIPs, and a photo op with each passenger.

MacAlpine states: "Come sail and rock away with us on the Axes & Anchors cruise, February 20-24, 2016. It is a do-not-miss event and I, as well as everyone else, request your presence on board!"

In addition, more than a dozen workshops by day in guitar-oriented and non-guitar musical topics will train your brain. And the cruise plans on featuring gear demos and displays from some of today's premier guitar and gear manufacturers. Of course, there will be plenty of time to splash in one of the on-board pools, roll the dice in the casino, soak up some sun on exotic beaches, explore the sights and sounds of Key West and Nassau, or just relax and sip your favorite beverage on the deck, all while rubbing elbows with some of the hottest rock legends and their even hotter fans.

Tickets for the cruise start at the competitive rate of just $899 per person (based on double occupancy), and include all accommodations, meals, concerts, open workshops, games, photo ops and more. Since the ship holds a limited number of passengers, early booking is highly encouraged.

Tickets are on sale now at www.AxesAndAnchors.com, and monthly payment plans are available. 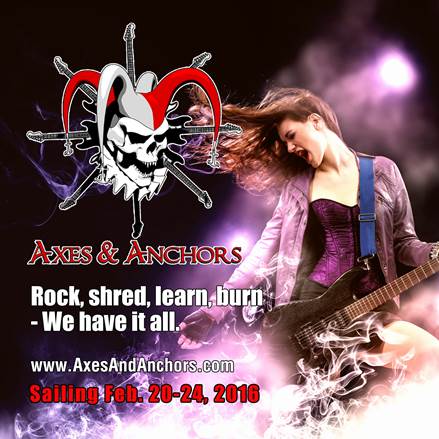