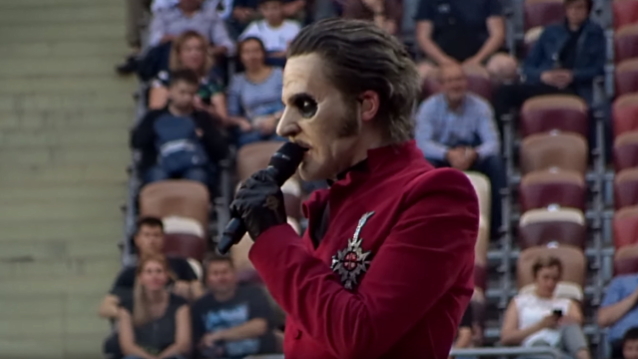 GHOST mastermind Tobias Forge, who was publicly unmasked in 2017 when former bandmembers sued him, forcing him to reveal his identity, has told "Talking Metal" in a new interview that he has had "slightly mixed emotions" about having his anonymity taken away. "Now, a few years later, I don't think about it as much," he said (hear audio below). "But I definitely pondered the concept about how to orchestrate that for years before, because I knew it was just a question of time.

"You can't have a goal for your aesthetic operation to continue to grow if your intentions with it is to be less known," he continued. "It doesn't work like that. That's defying physics. So I knew that for every step that I was taking in order for the band to become bigger, I'm taking a potential step of ruining the anonymity. But I also need to be clear in saying that the concept of anonymity as opposed to masked, that was something that I gave up very early. That's why I always said in interviews there's a clear distinction about being anonymous and about being masked versus unmasked. And some people picked up on that, [and] some people did not."

Forge recently said in another interview that his current stage persona, Cardinal Copia, has a very good chance of sticking around for GHOST's next studio album.

Tobias performed as a "new" Papa Emeritus on each of the band's first three LPs, with each version of Papa replacing the one that came before it. Papa Emeritus III was retired in favor of Cardinal Copia before the release of last year's "Prequelle".

Forge told Billboard that he is already focused on the band's next recording project, with plans to be in the studio again by the beginning of 2020. But GHOST still has an extensive touring schedule to get through for the rest of 2019, including an opening stint for METALLICA this summer and a fall North American headlining trek.