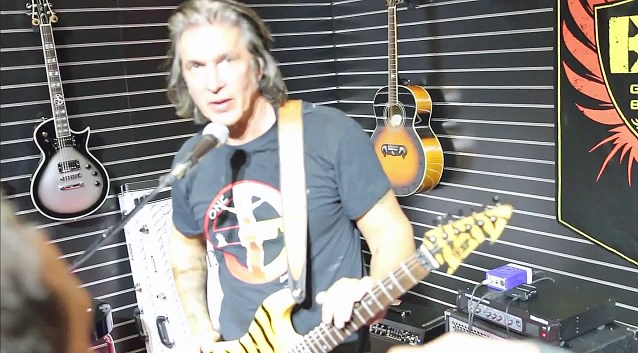 Video footage of George Lynch's (DOKKEN, LYNCH MOB, SWEET & LYNCH) clinic at the ESP during last month's NAMM show at the Anaheim Convention Center in Anaheim, California can be seen below.

LYNCH MOB's new EP, "Sun Red Sun", once again highlights the unique pairing of singer Oni Logan and Lynch, showcasing their ever-evolving songwriting abilities. Mixed and mastered by Chris "The Wizard" Collier (LITA FORD), it offers up straight-forward rockers like "Believers Of The Day" and "Play The Game", as well as more groove-oriented cuts like "Erotika" and "Subliminal Dream". The CD also features a dynamic Lynch guitar solo track called "Black Waters" as well as an acoustic ballad called "Sun Red Sun", which is a tribute to late BADLANDS and BLACK SABBATH singer Ray Gillen, who died on December 3, 1993 of AIDS-related complications. The release also features a cover of BAD COMPANY's "Burnin' Sky", and includes four remastered bonus tracks from the original "Sound Mountain Sessions" EP: "Slow Drag", "World Of Chance", "City Of Freedom" and "Sucka".