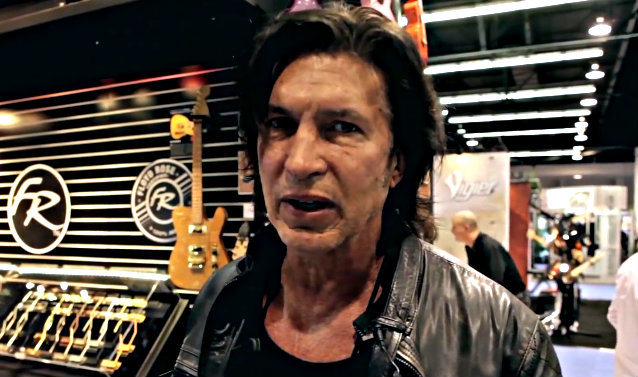 In a brand new interview with Rock Revolt Magazine, legendary guitarist George Lynch (DOKKEN, LYNCH MOB, KXM) was asked about the chances of a reunion of the classic DOKKEN lineup. "Well, it's always a possibility," he replied. "[But] what it really comes down to is Don [Dokken] being agreeable to doing equal splits financially. That's been a stumbling block all along. Despite all the other obstacles that we have for a reunion happening, that is actually the 800-pound gorilla problem. He feels he's entitled to special financial treatment if we do that, which is ludicrous and was never the way the band was built. The band was always built as a shared band, and I think that's one of the reasons it survived as long as it did and why it worked. The only person who ended up not liking that arrangement was Don, and it is really heavily why the band broke up."

He continued: "We were up for re-negotiating our contract with Elektra in the late '80s, which is a wonderful position to be in (that's when you get paid and you'd kind of be set for life). But we all worked many, many years to get to that point, and Don decided, 'Well, you know what? I gotta take a chance here, and I want it all.' He wanted us to be hired guns, and he would get the multi-million dollar re-negotiated deal. That's what it was all about. And that's still what it's about. So, unless he can come around and say, 'Hey, guys! We're all important. We all worked equally hard. There's enough money to go around. Don't need to be greedy here, just split it up equal, put that aside, put it in the file cabinet. Let s go to work and make a good record.'

"I have aspirations, but I don't have any sense that it's really going to ever happen. I wouldn't be opposed; I would like to see it happen. But honestly, just to have some nice closure, make a nice bookend to our career, and make the fans happy and make a little bit of dough, it would be nice to see it work in a healthy way after all we ve been through, but I am not holding my breath."

All the members of DOKKEN's classic 1980s lineup reunited on stage for the first time in more than a decade on November 29, 2009 at the House of Blues in Anaheim, California. According to OC Weekly, Don Dokken appeared on stage and said he had some friends he wanted to introduce. Jeff Pilson (bass) and George Lynch (guitar) joined Mick Brown (drums) for a two-song encore of "When Heaven Comes Down" and "In My Dreams".