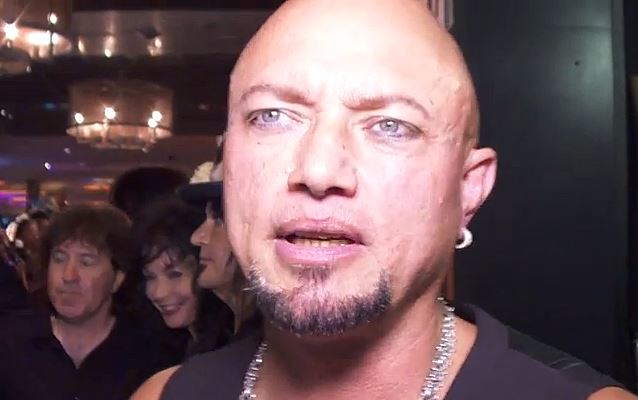 Bending Reality TV conducted a short interview with QUEENSRŸCHE singer Geoff Tate at the fourth annual Vegas Rocks! Magazine Music Awards, which rocked the Joint at the Las Vegas Hard Rock Hotel & Casino Sunday night (August 25) with some of the most legendary rock artists in the music business. You can watch the chat below.

"Frequency Unknown", the latest album from the Geoff Tate-fronted version of QUEENSRŸCHE, sold around 5,500 copies in its first week of release in the United States to land at position No. 82 on The Billboard 200 chart. Released on April 23, it was produced by Jason Slater at a studio in Northern California.

Tate's second solo album, "Kings & Thieves", sold 1,800 copies in the United States in its first week of release. The CD arrived in stores on November 6, 2012 via InsideOut Music.

In an interview with ARTISTdirect.com, Tate stated about his vision for "Kings & Thieves", "Typically, when I make a record, I have an idea of what I want to try to accomplish. I go about making that happen by making lists. I'm a list maker. I jot down all of these ideas I've got and I form those ideas into an outline. Then, I start using it as a punch list to take care of all these details I'd like to do. I knew I wanted to make a really solid rock record. I didn't want to stray too far into other musical endeavors. I wanted to keep it more rock-oriented with traditional rock instruments. I also knew that I wanted it to be more of a live record where all of the musicians get in a room and actually play together. A lot of it was recorded and written at the same time. That was very fun, and I've never done that before. It has an effect that makes the music seem more immediate and raw rather than being a polished, rehearsed-into-the-ground record, which I've done throughout most of my career. Making this record was a different process for me, and I made it very quickly. It flowed from the moment I started until the time I was done with it. It only took about six months to make. By comparison, QUEENSRŸCHE records have taken years to make."

Asked if there is any connection to his first solo record, Tate said, "Well, it has been a long time. It's been a long time coming too. They're two really different records to me. On that first solo record, I really wanted to stretch outside of the QUEENSRŸCHE box and do everything I could never do. I wanted to explore my influences in my writing. That first album has R&B influences, which I'm very into. It's got classical and electronica influences, but it doesn't have a lot of rock. 'Kings & Thieves' is really a rock record. I focused on that aspect."