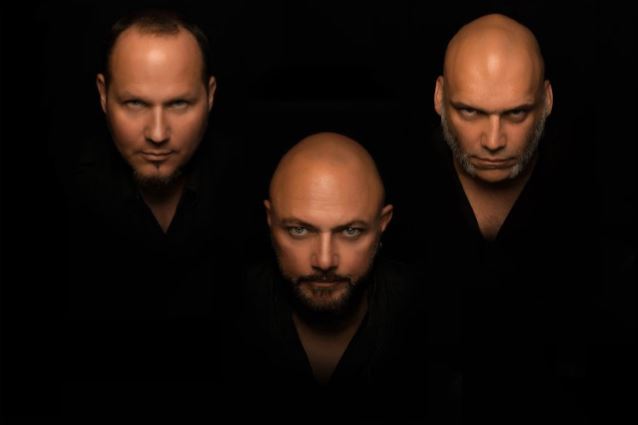 Former QUEENSRŸCHE frontman Geoff Tate spoke to Jimmy Kay from Canada's The Metal Voice about the upcoming "Trinity" tour, which will see him sharing the stage with two other singers, Blaze Bayley (IRON MAIDEN) and Tim "Ripper" Owens (JUDAS PRIEST).

Tate, Owens and Bayley recently spent time in Geoff's hometown of Monroe, Washington filming a video for the song "Taking On The World", to be featured on "Resurrection", the second album in a concept trilogy from Tate's OPERATION: MINDCRIME project.

Asked about his experience working with Bayley and Owens, Tate said: "It was really interesting, 'cause I had never recorded them before or worked with their vocals before. So it was really interesting from an engineering standpoint to see the differences in our voices and the sound of our voices; they are three completely different things — different microphone needs, different EQ needs, all that kind of stuff. We're very different animals, really. But it was really fun working with that difference and making something out of three really distinctly different voices — very fun. And I look forward to touring with these guys and playing shows with them, because their personalities… [Laughs] We just spent three days together shooting a video for the song, and we had the best time — just the best time. They stayed at my house, and we drank a lot and told a lot of stories and laughed a lot. And that's great, when you can just click as people and have a good time without it being weird or forced or that kind of thing. I really adore both those guys; they're fantastic."

Tate said that he shared a special connection with Bayley, whom he described as "so loud; it's unbelievable how loud that guy is — just his speaking voice, like when you're in a car with him driving in traffic for an hour and a half. [Laughs] He's like an air horn, you know — so loud."

He continued: "He and I really share a passion for motorcycles, and so this video he was very excited about, 'cause there was a lot of motorcycles and hotrod cars in this video and he got to ride a bunch of different customized motorcycles in the video and he was real happy about that."

Speaking about the setlist for the "Trinity" tour, Tate said: "We are the three ex-singers from famous bands, so we're gonna do the music that we were involved in making with the bands. I'm gonna be doing QUEENSRŸCHE material and Blaze, of course, is doing IRON MAIDEN material and Ripper is doing JUDAS PRIEST. And then we're getting together to do some songs together — we're trading off on lead vocals on some songs, we're harmonizing on some songs. It's really kind of all about singers and playing some great heavy rock music and having a good time doing it."

Asked if there is a chance of the "Trinity" tour visiting other cities and countries, Tate said: "Well, the biggest challenge that we have of doing a tour together, we found, is all three have very extensive touring schedules, so getting us all lined up to be in the same place, it's really quite an undertaking. So we managed to get, I think, ten dates, to start with, in the Northeast in the end of November. And we're gonna try to book some more in other parts of the world. It's kind of a challenge to do that at the moment, but we're all kind of working towards doing that, 'cause we enjoy the project so much. So we're gonna see if we can extend it and add it to some different places in the world."

Bayley told The Monroe Monitor that the idea of bringing three vocalists together in one song really intrigued him. "Tim has this very harsh edge to his voice — he's really a machine — and then I'm on the more emotional side of things," Bayley said. "Geoff sits there right in the middle being able to connect the two things, and musically I found that very interesting, so I really wanted to be a part of it."