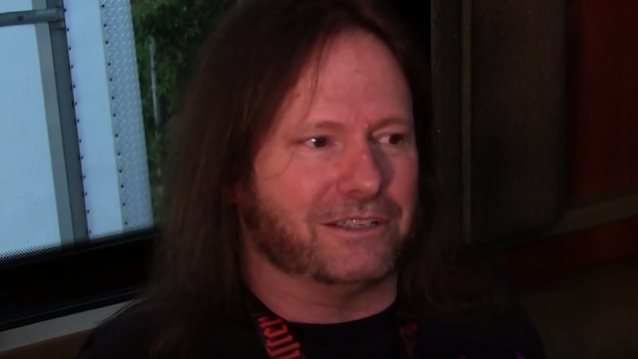 Red Carpet News TV conducted an interview with vocalist Steve "Zetro" Souza, guitarist Gary Holt and drummer Tom Hunting of San Francisco Bay Area thrash metal veterans EXODUS at the Metal Hammer Golden Gods Awards, which was held June 12 at the IndigO2 at The O2 in London, England. The evening saw EXODUS accepting the award for "2017 Inspiration", which was presented by KREATOR mainman Mille Petrozza. You can watch the full interview below. A few excerpts follow (transcribed by BLABBERMOUTH.NET).

On EXODUS's longevity and being recognized for "2017 Inspiration":

Steve: "[We've] been in this business for a long time. It's great to get this type of award. We've had so many bands that have come up to us, even bigger bands, now than EXODUS, that have said, 'EXODUS have inspired us.' I guess, if anything in life, if you've turned somebody onto that something you do, it's the greatest feeling in the world."

Tom: "It's just passion, through this crazy music we're happy to be a part of."

Steve: "I don't think other fans are like metal fans. They take it really to heart. We're 32 years into this because the fans are so strong and they love it. You can't tell a heavy metal fan 'Oh, don't listen to that.' They don't care, they don't want to hear it. This is their music. I don't think any other genre of music is that deep."

On the devotion of EXODUS's fanbase:

Steve: "We're very fortunate. That's why we thank them every night. After the show, we go out and take pictures with them and hang out with them. We want them to feel like they're a part of it as well as we are, especially in thrash metal music. The crowd is so much a part of the show itself because us onstage looking out at them going crazy is awesome to look at. We wouldn't imagine what it would look like if they were standing there, staring at us."

On EXODUS's finest moment as a band:

Gary: "I'm most proud of… every moment that we're alive. We've been through a lot of shit — a lot of shit a lot of bands haven't been through. People dying, drug addiction and all of that. We're still here; we're well preserved on many years of pharmaceuticals. We're alive. Dude, we've survived so much shit that would kill so many people and we're still here and people are inspired by more than our ability to consume drugs and alcohol. EXODUS has a reputation as being wild men. It was largely deserved. We're still making killer, kick-ass music and we're doing it for the right reasons now. We're doing it for the love of the music and not for the love of any ulterior motives. We've survived. We're here. It's quite an accomplishment."

On the members of EXODUS staying clean:

Steve: "It's been clean living for a few years. Other than a little bit of pot and some booze…"

Gary: "It's not clean living… it's just 'chemical-free.' Unless you call Jägermeister and half of ice chemicals, which it's not. We know our limits. We've found our limitations many years ago and we've watched some of our closest friends die. If you don't learn from that, you're not going to learn a lesson anywhere in life. We learned that music is what brought us together and music is what keeps us together. We don't want to fuck up. We want to continue to make music together and not waste any opportunities we have."

EXODUS is planning to enter the studio in the fall to begin recording the follow-up to 2014's "Blood In Blood Out" album for an early 2018 release.

"Blood In Blood Out" was EXODUS's first album since the departure of the group's lead singer of nine years, Rob Dukes, and the return of Souza, who previously fronted EXODUS from 1986 to 1993 and from 2002 to 2004.

Hunting told the "Mike James Rock Show" at this year's Download festival that the band has "five or six" new songs structured so far for the follow-up to "Blood In Blood Out", as well as "bits and pieces" of the remaining few tracks that will appear on the forthcoming disc.