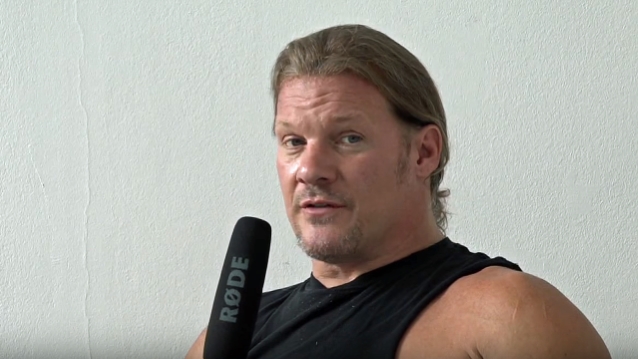 FOZZY vocalist and WWE wrestling superstar Chris Jericho recently spoke with Slovenia's V Živo. The full conversation can be seen below. A few excerpts follow (as transcribed by BLABBERMOUTH.NET).

On whether he prefers to perform before fans or for audiences who are less familiar with the group:

Chris: "They're both fun. When you play your own show, headlining, most people know the band and the words to the songs, and they're very into it and excited. But it's also a lot of fun to play to new audiences as well, because that's how you make new fans. Whether they know the material or whether they don't, they feel the energy, and they feel the excitement and the fun. We do rock n' roll with a smile, and we take great pride in the fact that every time we finish a show, the crowd is chanting 'FOZZY.' Sometimes we have to work harder for it than others, but most people come to a rock n' roll show to have a good time. Whether we're headlining, whether it's a festival, whether we're supporting, it's always the same reaction — it's enthusiastic reactions from us, and then you get it back from the crowd, working together."

On loving THE BEATLES:

Chris: "[I'm a] big BEATLES fan. That's probably my favorite. My favorite three bands are THE BEATLES, IRON MAIDEN and METALLICA... I think THE BEATLES have pretty much influenced everybody. I was a huge BEATLES fan when I was a kid, and then when I got to junior high school, all the pretty girls were wearing JUDAS PRIEST shirts and OZZY [OSBOURNE] shirts and IRON MAIDEN shirts, so I started listening to Ozzy. I realized a lot of [his] songs sound like THE BEATLES, like 'Goodbye To Romance'. I realized, 'Okay, so even he's influenced by THE BEATLES.' As you grow older, most bands can pull something from THE BEATLES. I think most great rock n' roll bands either rolls down to being influenced by THE BEATLES or THE [ROLLING] STONES in one way or another."

On the parallels between rock and professional wrestling:

Chris: "When I was a kid, I used to love wrestling and I loved rock n' roll. I decided very early on, 'That's what I want to do when I grow up — I want to be in a band, and I want to be a wrestler,' and didn't really see why I couldn't do that. A lot of other people had opinions — 'Oh, you'll never do that' — but I never felt that way. I always loved the characters of wrestling. I felt they were very similar to the characters of rock 'n' roll, a great rock 'n' roll frontman like Freddie Mercury or David Lee Roth. Those are wrestling personalities — they're larger-than-life personalities. What I realized early on is that when you're performing in front of a live audience, you have to connect with the crowd. If you can connect with the crowd, you'll always have a gig, whether that's wrestling, music, if you're a stand-up comedian, if you're a stage actor, whatever it may be in front of a crowd, because you're getting the instant gratification and the instant reaction from the people that are watching. If you're filming a movie, you might not see it for another six months. If you're doing a rock show, if the people aren't reacting after every song, you'd better change what you're doing and get them involved. It's a much harder art form to be in front of a live audience, but once you know how to do it, it becomes very easy and it's a lot of fun... I've been doing this since I was 19 years old. It's just part of who I am at this point in time. Whether it's wrestling or music, it's still getting on the bus or getting in a car or getting on a plane, going from one city to the next... It never really ends. It just continues on and on, and it's something that you see THE STONES and McCartney still doing it in their 70s. I don't see any reason why I won't be doing the same thing when I'm that old."

On the dark sides of both industries:

Chris: "Drug testing in WWE [World Wrestling Entertainment] is so strict [now]. There's no steriods in the WWE anymore. Trust me — I know. Nothing. You can't even smoke marijuana without getting fined. You see that in music too, because there's not as many tragedies. I think the '80s and '90s for rock 'n' roll, and the '70s, was much more of a Wild West-type environment. Even now, touring, I don't know a lot of drug addicts in rock 'n' roll. I'm sure there's a few, but it's not really like that anymore. Guys drink, but as far as the hard drug use, going through my mental Rolodex, I can't think of anybody that I know who's in rock 'n' roll right now that has a drug problem. Not that I know of; I'm sure there's some. The same thing in wrestling — there's too much testing now, and there's just too much at stake to do that, for the company and for the guys themselves. Most of the [wrestlers] that you find out are dying are guys that came in the business in that time frame, but guys that are coming in the business now, it's not really like that more anymore."

FOZZY continues to tour in support of its seventh album, "Judas", which was released last October by Century Media.