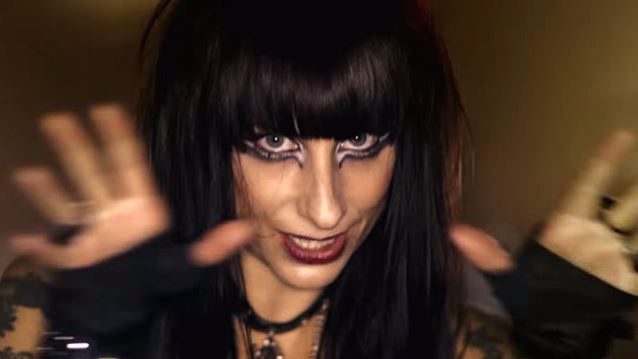 Singer Liv Jagrell of Swedish heavy rockers SISTER SIN spoke to Sleaze Roxx about the band's decision to call it quits after 13 years of existence. A couple of excerpts from the chat follow below.

Sleaze Roxx: I'll ask the obvious question first. What happened because it seemed so sudden with SISTER SIN calling it quits?

Liv Jagrell: Actually, it's just that we toured too much and we got burned out. That's the simple answer. They just felt like they did not want to do this anymore. We can't tour this… because it's both economical and like we toured so many… This year, we had been out for almost four months or something so it's a lot of time away from family. It's a lot of time away from friends. And also just to survive in the business is hard so I think we maybe worked too hard in the last years. [Laughs]

Sleaze Roxx: Was it all the members that were feeling that way or some more than others?

Liv Jagrell: Maybe some more than others but I mean it's no hard feelings between us. It's what it is and you can't force people to keep doing this because it's a hard business.

Sleaze Roxx: Were there any thoughts in whomever was interested in continuing to forge on with the name SISTER SIN without the others?

Liv Jagrell: Hmmm. No. No. Not directly.

Sleaze Roxx: What do you mean by that?

Liv Jagrell: Because if it's going to be SISTER SIN, it's got to be at least three of the members. For me, that's SISTER SIN. I would never take the name SISTER SIN and continue by myself because that will feel… That's not right because SISTER SIN have been together for over ten years. In my opinion, it's got to be somewhat close to those members otherwise it's not SISTER SIN.

Sleaze Roxx: Fair enough. It sounds to me like you are ready to continue but some of the others are not. Is it fair to say that Dave and perhaps Jimmy are not and you would be interested in continuing with music?

Liv Jagrell: Hmmm. Not exactly, actually. Absolutely. I am not giving up music. I will be back, but I will not say anything more about the other members and to tell who wanted to continue to play and who did not want to play. But as for me, I am 100% sure that I will still be doing this. I just don't know exactly how, what and where right now because this is very sudden and very just recent so I haven't thought about that so much. I am still trying to understand that the band that I had for over ten years is not here anymore. I mean, it's like a relationship. It's like someone that you have been for that long. It takes time to think through and like just everything but I will be back in the music business, for sure.

Sleaze Roxx: Do you think that if the band had taken a little bit more time between albums, that SISTER SIN would still be together?