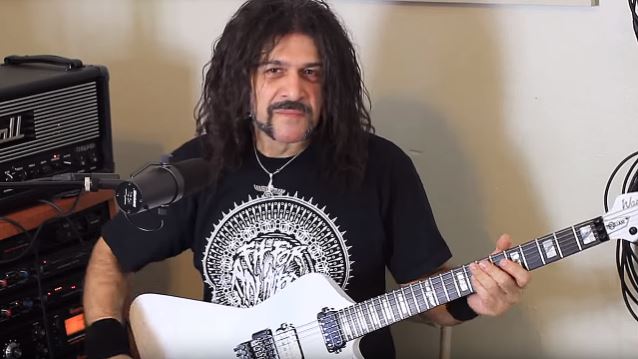 Jack Antonio of "Do You Know Jack?" radio show recently conducted an interview with former PHILIP H. ANSELMO & THE ILLEGALS guitarist Marzi Montazeri. You can now listen to the chat using the Spreaker widget below.

Asked if he would agree with Philip Anselmo's recent comment that the former PANTERA singer "jumpstarted" Marzi's career with their THE ILLEGALS collaboration, Montazeri responded: "Oh, man, clearly. Absolutely. Absolutely. Of course. Me and Philip had a run in SUPERJOINT RITUAL [years ago], and that didn't work out. It had nothing to do with Philip, actually; it was the drummer of the band. That's about as much as I've actually said about that project, the SUPERJOINT thing. [They were a] great band, great guys, and now they've got a current lineup. Everything's great with everybody, man. Everybody's moved forward doing their own thing, which is wonderful, you know what I mean? I didn't start playing guitar when I met Philip."

He continued: "As far as getting the notoriety that I have now, [Philip] clearly is instrumental in having to do a big part of that, and I appreciate that clearly. I went into it in March 2010, and things were quite different then, having the intention of doing the same exact thing for Philip — which was to just kind of get him back in there. And that's what we did with THE ILLEGALS. [I] did three tours, one album, two EPs, and then, you know… The only thing I can say about them is the best — the best to 'em, man. Best to 'em. Nothing but the best. Positive vibes."

Asked if he is on speaking terms with Philip and the rest of the ILLEGALS guys, Marzi said: "Well, I ain't talked to 'em. It's kind of funny. You're the only one that's asking me these questions… Well, I mean, I'll tell you the truth. No, I haven't spoken to any of 'em, and I found out through the Internet that I wasn't in the band. But we're gonna leave it at that, man. Again, like I said, I wish them the best. And I'm doing my thing, and there's no hard feelings on my camp or me, period. And if anything, I appreciate the fact that Philip gave me a chance so that the rest of the world could know who I am. That's that, man."

Marzi also talked about the possibility of one day collaborating with Anselmo again in some capacity. He said: "You can never say never. You have to understand something: whatever the premise of this may have been — God knows — I love him like a brother. And you don't say that one minute, and then when you don't speak to someone and shit hits the fan without you knowing, and you're gonna, like, hate on somebody. That's not gonna happen. You see, I've known him for a long time and I've known his family, and I adore and love them. And that's that. As far as making music goes, I would say it's more of a sad event that him and I can't collaborate. But, man, let me tell you something: I'm not a follower, I'm a leader. And that's that."

Montazeri is currently involved a new project called HEAVY AS TEXAS, which he has described as "a southern groovy band." He said: "It's got extreme levels to it, but it's not just an all-out extreme band, to label it that. I always called it 'heavy Texas blues and beyond.' The 'beyond' part is all the psychedelic stuff, man. You know, growing up with [BLACK] SABBATH and [LED] ZEPPELIN and PINK FLOYD. And then getting into other bands, growing up… I saw a movie my dad took me to called 'Thief' with James Caan and I just remember seeing that movie and thinking, 'Damn, man, the soundtrack was so killer.' I'd come to find out it was a band called TANGERINE DREAM. So a lot of those bands kind of played a big role… I always loved the long epic rock songs. And a lot of '70s, late '60s influence, so that is the core of HEAVY AS TEXAS. But then you add to it the tone that I have today and the way we write today, and it's kind of different."

Anselmo recently told MetalUnderground.com about THE ILLEGALS' split with Montazeri: "What I wanted to do with Marzi anyway was jumpstart his career, which I did. He's the type of guy that needs to be the focal point of pretty much anything he does. So he's got that now and I'm happy for him. More power to him."

Regarding how the addition of guitarist Mike DeLeon came about, Anselmo said:"Mostly from his association with my drummer, Blue [José Manuel Gonzalez], and my other guitar player/bass player from SUPERJOINT, Steve [Stephen Taylor]. Steve Taylor was constantly saying, 'DeLeon is the guy. DeLeon is the guy. He wants it the most! He wants it the most!' I trust them. I trust their judgment. I trust their intuition. So far, every time DeLeon has come to jam, it has been serious grinding. He takes a good beating, man. He's great. He's a pleasure to work with."

PHILIP H. ANSELMO & THE ILLEGALS' debut album, "Walk Through Exits Only" sold around 8,700 copies in the United States in its first week of release to debut at position No. 35 on The Billboard 200 chart. The CD was produced by Anselmo and Michael Thompson, and recorded over a couple of years at Philip's New Orleans studio, Nodferatu's Lair.