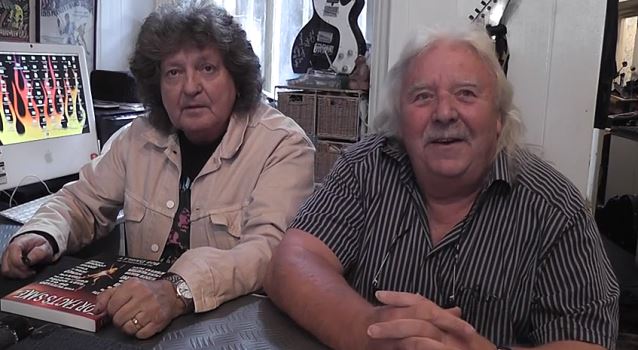 Mark Taylor of MetalTalk.net recently conducted an interview with former BLIZZARD OF OZZ and URIAH HEEP members Bob Daisley and Lee Kerslake in London, England. You can now watch the chat below.

Daisley is selling signed copies of "For Facts Sake", via his official web site.

Says Bob: "At last, my autobiography 'For Facts Sake' is ready to roll. It covers my whole life and my fifty-year career in music, and features everyone that I've ever worked with — CHICKEN SHACK, MUNGO JERRY, WIDOWMAKER, RAINBOW, THE BLIZZARD OF OZZ, URIAH HEEP, Ozzy (and Sharon) Osbourne, Gary Moore, BLACK SABBATH, the notorious Don Arden, and too many others to mention here. The stories reveal some interesting and, until now, unknown facts about many of these artists and characters, and with more than 460 photos throughout the text, it provides a pictorial view of my journey."

In a 2012 interview with Rock Cellar Magazine, Daisley revealed that the 30th-anniversary remastered reissues of Osbourne's classic early albums, 1980's "Blizzard Of Ozz" and 1981's "Diary Of A Madman", which came with a box set of previously unreleased live recordings, a coffee table book and other goodies, could have packed much more material than what actually made the release.

"There'd been talk about it during 2010, and it was then that I offered to supply tapes of our rehearsals and writing sessions, to go as proper bonus material," Daisley said. "And I just said that I wanted a royalty out of it, because it's my stuff. But they wouldn't do it because they didn't want to give me a royalty — they just wanted to buy it.

"So no agreement was made, and as a result the bonus material in the box set is minimal, which is unfortunate because I know the fans want to hear the stuff that I've got — recordings of the writing sessions, rehearsals and the songs taking shape. But the Osbournes wouldn't come to the table, y'know. I didn't even ask for an equal royalty, it was just a small royalty I wanted because it's my stuff…"

Daisley added that he had "literally hours and hours of tapes I've got from us writing those albums and rehearsing it" that could have been included in the package. "You can hear the songs changing, the different parts taking shape, and all this stuff would have been perfect bonus material for the box set," he said. "Sadly, the Osbournes are just too greedy and self-absorbed."

Bob Daisley said in a 2010 interview with his web site that he had not been contacted about the 30th-anniversary editions of "Blizzard Of Ozz" and "Diary Of A Madman". The tracks played by Daisley and drummer Lee Kerslake on both albums were replaced on a previous reissue after Daisley and Kerslake sued Ozzy and Sharon Osbourne over royalties.

Daisley told the web site, "Neither Lee nor I have been contacted, considered or consulted in the decision to re-release the original recordings. As for royalties, we have not been approached for a reconciliation and have been offered and promised nothing."

Ozzy told The Pulse of Radio he was against the idea of replacing the original tracks when he found out about it. "Believe me, it wasn't my doing," he said. "I mean, I didn't know that was being done, 'cause Sharon was fighting all the legal things that were going down at the time. I said, 'What did you do that for?' And she said, 'The only way I could stop everything was if it went to that level.' And I said, 'You know what, whatever the circumstances were, I want the original thing back.' I mean, I wouldn't have done that."

Daisley says that he and Kerslake were fired because of disagreements with Sharon over a number of things, including refusing to do two shows in one day out of worry that Ozzy would blow out his voice.