An official trailer for "Megalife: The Autobiography Of Nick Menza" by J. Marshall Craig is available below. The book will be released on December 11 via Post Hill Press.

Official book synopsis: "With Nick Menza behind the kit, MEGADETH transitioned from celebrated cult band to international superstars. 'Rust In Peace', the first album to feature Menza and Marty Friedman, was instantly considered a classic, sold over a million copies, got nominated for a Grammy Award, and established what many consider to be the definitive MEGADETH lineup. It was the beginning of a remarkable run in which the band would release three career-defining albums and tour the world many times over.

"Success was a rollercoaster ride of highs and lows: sobriety and addiction, peace and tension, laughter and anger. Until one day it all came crashing down. Despite his contributions to the band’s most iconic and enduring work, when Menza was forced to seek treatment for a debilitating tumor in his knee, he awoke from surgery to learn he was being fired from the band by the man he considered a brother and mentor, the ever-enigmatic Dave Mustaine. The devastating news sent him into a spiral of anger and frustration, followed by a dark period of self-medication that nearly killed him.

"'Megalife: The Autobiography Of Nick Menza' is an unflinching look at life inside of one of metal's most successful bands, from the back of the stage to the bunks on the bus, as well as a blow-by-blow account of the tumultuous, complicated relationship between Menza and Mustaine. It is also the singular story of a self-taught musician who achieved his dreams through sheer will and determination, watched it all disintegrate, and then rebuilt himself from scratch."

Late in the evening on May 21, 2016, Nick collapsed after suffering a heart attack during a concert with Chris Poland and Robertino "Pag" Pagliari in their band OHM: at The Baked Potato in Studio City, California and was pronounced dead upon arrival at the hospital. The Los Angeles County Department of Medical Examiner-Coroner said Menza died of hypertensive and atherosclerotic cardiovascular disease.

Two years later, the Menza camp had MEGADETH founder Dave Mustaine in the crosshairs, according to author J. Marshall Craig, manager Robert Bolger and Rose Menza, Nick's mother, who is now guarding and caring for the drummer's estate and legacy.

Shortly after Nick's passing, Rose expressed her "enormous gratitude for the outpouring of love and condolences from Nick's many friends and fans," adding that she was "so happy and excited" that "Dave Mustaine has chosen to help celebrate Nick's life and help the boys (Nick's two surviving sons)" with a benefit memorial concert that was proposed to feature all willing former members of MEGADETH.

In the days after Nick's death, Mustaine told Kerrang! magazine that, "The Nick that I know, at the end, I think that he… he went to heaven doing what he wanted to do: play drums. And I think that instead of us all mourning, we should celebrate his life, celebrate his legacy."

Mustaine insisted in interviews that he had a "very, very close" relationship with the drummer, despite Menza's public accusation that the MEGADETH frontman sent him a "ridiculous proposal" for a failed 2015 reunion of the band's classic "Rust In Peace"-era lineup. In interviews and public posts on his social media, Nick revealed that Mustaine refused to pay for him rehearsals or even recording the next record, and offered an insulting weekly touring rate. When Nick's attorney and management submitted a counter-proposal, Mustaine allegedly lost his temper and scuttled the reunion, changing his phone number and e-mail address. Nick and Mustaine never spoke again, which Craig says is explored fully in the upcoming book.

"Dave's betrayal was really a huge blow to Nick," Craig said. "But I can say that not long after, Nick was as sure as ever that he was better off and far more musically satisfied playing with Chris and Pag. He absolutely loved those guys. He was far more excited about the prospect of playing Europe with OHM: than he ever seemed to me when the subject of MEGADETH came up. He told me he wanted the reunion for what it could have and should have been — a celebration of a band at its zenith, regrouping one more time for the fans.

"Yeah, it would have been great. And who's to say it still can't be sometime in the future," Nick said in his final interview with Craig, at Rose Lane Studio in Carpinteria less than a month before his death. "It sure doesn't look good now but I'll never say never; it's all up to Dave. It always has been."

In the two years since Menza's death, sadly, Mustaine has failed to not only stage a memorial concert featuring surviving MEGADETH alumni and for the benefit of Nick's sons — he has reportedly yet to call Menza's parents or even send a condolence letter.

"He never called," Rose said from the family home in Studio City. "I am really upset at him (Mustaine). They were NOT good friends, no matter what he says now that Nick's not here to answer what's being said about him."

Mustaine told the Q103 radio station a couple of days after Menza's death: "People think that we had this failed reunion attempt. There were several times that we tried to reconcile stuff, and it just didn't happen for whatever reason — I don't know why, but it didn't."

Said biographer Craig: "Dave knows exactly why there was no reunion, since he pulled the plug — again — as can be clearly seen in mail exchanges between him and Nick, which Nick gave me complete access to. I've put the conversations in the book, unabridged," Craig said. "Dave's at once friendly and encouraging and then, in an instant, childish and rude; Nick comes across like, well Nick: polite, agreeable and accommodating, trying his best to get along and make it work.

"I've been telling media before and after Nick's passing that he never sought to call out Dave for the things he did and said, which is completely true. Nick wanted to take the high road and, indeed, he always did, and we're honoring that legacy.

"Believe me — there is A LOT that Nick revealed to me that is not in the book … though what is most fans will find pretty shocking, but not a surprise.

"In consultation with Nick's mom and dad and sister and ex, his manager Rob and Nick's closest friends, we're unanimous in the decision to not censor anything now."

Craig, best known for his deeply behind-the-scenes books with THE ANIMALS frontman Eric Burdon and THE ROLLING STONES keyboardist and musical director Chuck Leavell, believes the most disgraceful incident so far is the MEGADETH frontman's treatment of Menza's surviving young boys.

As for repeated declarations from Mustaine that he "sang almost every single note of Marty Friedman's guitar solos, and I wrote the majority of Nick's drum parts, and I wrote almost every bass note that Ellefson played" and "I did it to [former guitarists] Jeff [Young], Chris [Poland] and Al [Pitrelli], too," Craig said that long before Nick's death, he held nothing back on discussing his time in MEGADETH and how the band's management treated him in years since. "I've been privy to it all," Craig said, "the e-mails, the attorneys' and managers' correspondence on both sides. I think it paints an ugly picture, but fans will be able to make that assessment for themselves when they see the book.

"Nick didn't want a tell-all, and nothing about this book can be considered salacious in the least," Craig concluded. "But that doesn't mean it's not going to be controversial and perhaps bruise a few feelings that deserve to have the wind knocked out of them: This book is the truth — Nick Menza's true MegaLife." 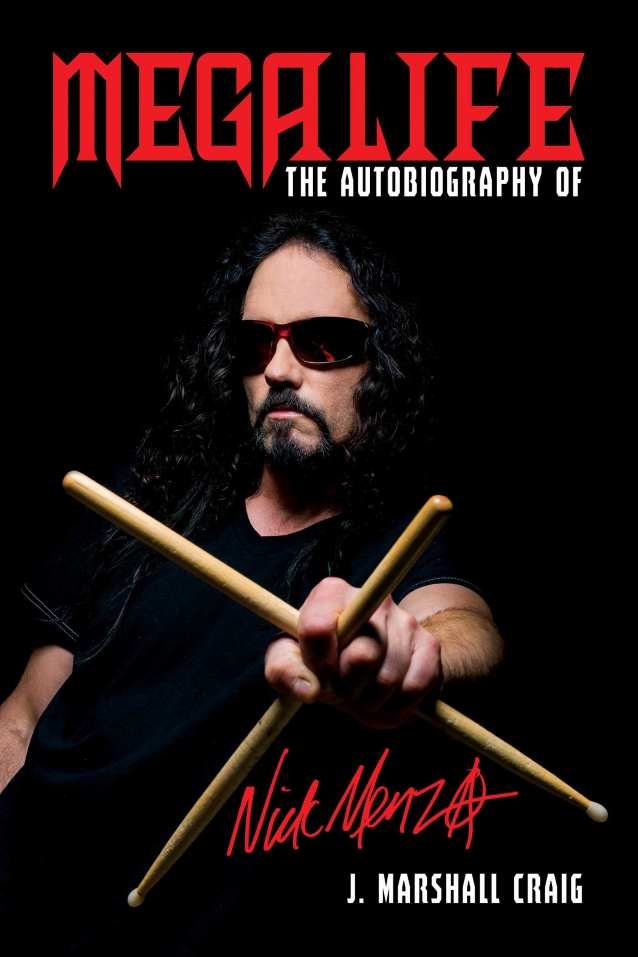