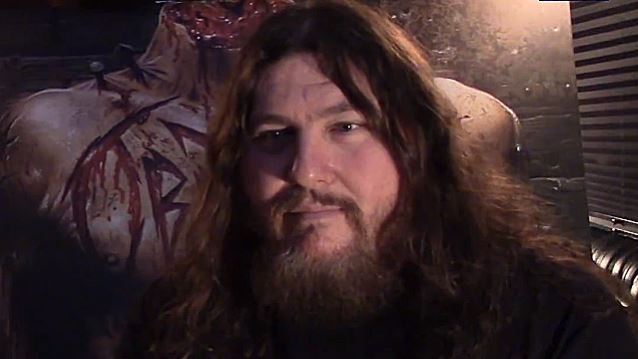 Bassist Terry Butler (OBITUARY, ex-DEATH, MASSACRE) and vocalist Ed Webb (ex-MASSACRE) are forging ahead with an as-yet-unnamed project which will feature Greg Gall (SIX FEET UNDER) behind the drum kit. Butler states: "It's in the infancy stage at this time, but will be up and running soon. I'm not making any promises on direction or style. Just know it will be HEAVY AS HELL!!!"

In other news, Butler (pictured) has released the following statement: "Ed Webb and I would like to express our disappointment that MASSACRE are not on the DTA European 'Symbolic' tour. We were very much looking forward to this high-profile tour to help get MASSACRE's music and message to fans old and new. Unfortunately, that was cut short by a series of events that could not be overlooked. It is a shame because you the fans suffer the most.

"'Back From Beyond' is a great record and Ed and I are very proud of how it turned out.

"Thank you for your support.

"MASSACRE are once again and forever dead!!! Que será, será.

"I have also set up a merch store for all the leftover MASSACRE merch. The merch is from our recent U.S. tour. I want to give those fans that didn't get merch the chance to get some. Follow this link and see what we have."

MASSACRE's "comeback" album, "Back From Beyond", was released on March 24, 2014 in Europe and April 1, 2014 in North America via Century Media Records. The CD was recorded and mixed by Tim Vazquez of CGM Studios in Altamonte Springs, Florida. The cover artwork was created by Toshihiro Egawa (CRYPTOPSY, KRISIUN, DEVOURMENT).