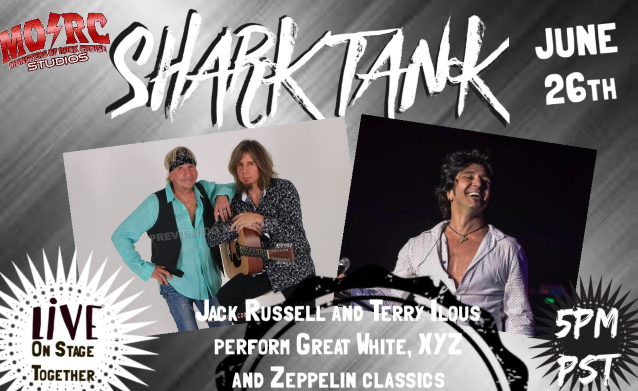 Ex-GREAT WHITE singer Jack Russell will team up with his successor, Terry Ilous, along with guitarists Robby Lochner and Phil Woodward, for a special acoustic concert on Friday, June 26 at 5:00 p.m. PST on the Monsters Of Rock Cruise Facebook page.

Says Jack: "We'll be playing some GREAT WHITE songs, I'll be doing some [LED] ZEPPELIN songs, Terry will be doing some XYZ, of course, and he will be joining me on other songs. It's gonna be a blast. You're not gonna wanna miss it. It doesn't cost a dime — just your time. It's gonna be great. And I guarantee you, you're gonna enjoy rock and roll at its finest. Please be there with us."

Back in July 2018, Russell slammed his former bandmates in GREAT WHITE for the "deceitful" way Ilous was kicked out of the group.

Russell, who was himself fired from GREAT WHITE in December 2011 (after being on hiatus from the group since 2009), took to his Facebook page to offer his thoughts on Terry's departure from the band, writing: "I just wanted to express my condolences to Terry Ilous for the deceitful way my X band members dealt with the situation of his termination kind of reminds me of something else. Huh? In the last few months Terry and I have gotten to know each other through Linkedin have become what I would say friends. As far as I'm concerned, he's a great guy and he had an opportunity and he took it. The fact is it was my fault that it all happened to begin with. I was unreliable, unhealthy and my addiction ruled my world. I wouldn't have wanted to play with me either if I were them. The only thing I was very upset about was the way they went about it. But at least Terry got an e-mail where I received nothing not even a phone call or a return message. But this is not about me this is about Terry. I'm sure he will find his way to a better place as he is a great singer and has a lot of talent and I have a lot of respect for him. I wish him well and I hope you will all support him in his future efforts."

LIVE Acoustic show Friday June 26 at 5 p.m. PST with #RobbyLochner #TerryIlous & others! Click on the link below to hear details from me! #Retweet #JRGW ?#JackRussellsGreatWhitehttps://t.co/xD0vYIBxtB