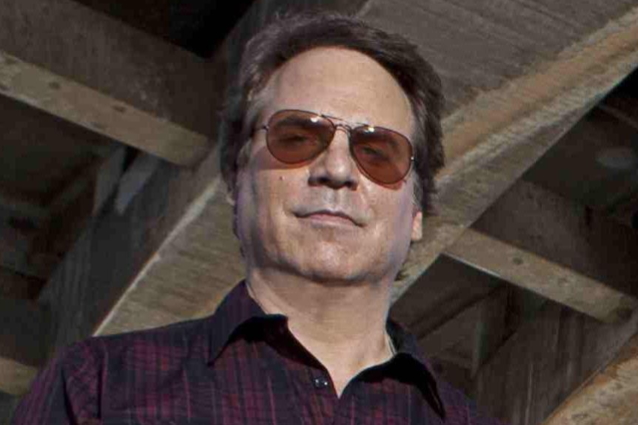 FOREIGNER guitarist/saxophonist Thom Gimbel recently spoke with Debra Miller of the Evansville, Indiana radio station WIKY. The full conversation can be streamed below. A few excerpts follow (as transcribed by BLABBERMOUTH.NET).

On studying music at Boston's Berklee College of Music:

Thom: "It was hard. I got there and I thought I was good because I was from a small town, a real showoff, and then all these teachers and other kids were there. They'd been playing since they were four years old. I had to deal with that — like, 'Whoa, I thought I was good, but I guess not.' They say you have two choices — you've got to practice six hours a day, or just go do something else. That's kind of hardcore [when] you're just a freshman in college. That's a little bit rough, but finally, I decided to do it, and after years and years and years, I'm still doing it today. I still like to practice an hour and a half a day. That changed my life forever. It was a dedication — I ditched everything else just to do music. There was a lot of sacrifice involved, a lot of hard work. Moving equipment in the early days... A lot of people were having fun out by the pool. We were practicing in basements. That's how you get good."

On how many different instruments he plays:

Thom: "You mean at one time, or collectively? [Laughs] I haven't counted lately. I think it was around seven, but I didn't count the harmonica. They're like my children — I love them all... I tried a little bit of trumpet and trombone, because I wanted to be able to record my own horn sections — like, CHICAGO-sounding — with those three instruments. Of course, once you're in the studio, you can layer them, but it was just a little too much to maintain all those different kinds of cheek muscles. For the brass, you actually need lip muscles, so it was too much for me, but I do love them."

On whether today's music fans have broader tastes:

Thom: "I think in the old days, you were a kid, and you were sort of limited by what you had for your album collection and [what] your friends had. You would say things like, 'Yeah, we listen to this, and we don't like anything else.' When you're a kid, that's the way it is. I'd be interested to know if kids today are still like that. It's got to be more broad-based, because everything is available. You can just click and say, 'Oh, what do you know — I like Puccini opera.' We liked weird stuff when we were kids. We liked our parents' jazz collections — we'd find Louie Armstrong 78 records in the basement. My dad had Ramsey Lewis and my mom had jazz records, and that's how I got into it. I hear that kids are doing that nowadays, but they're discovering their parents rock albums."

Thom: "I think I might have hoped and dreamed of something like that — dreamed of playing in those huge settings. There's nothing quite like it. We've just done some festivals in Europe where there was 100,000 people. You get a special kick out of that. With AEROSMITH, Woodstock II was either 400,000 or 600,000, some crazy number, and the nights at Madison Square Garden, sold out, Boston Garden shows with AEROSMITH, and with FOREIGNER, we continually play. We've sold out shows and arenas. Those are the memories that make you feel like the dream came true... I feel so fortunate to have found a home in this band — the first 10 years with Lou [Gramm], and the last 15 years with Kelly [Hansen]. It's just a perfect fit for me, because I get to use all those instruments. I never knew why I was learning them all, but now I know!"

On performing the iconic saxophone solo in FOREIGNER's "Urgent":

Thom: "That's really the part where I get to lose my mind and travel to another dimension. [Laughs]"

Gimbel initially joined FOREIGNER in 1993 as a substitute for Scott Gilman and became a permanent member two years later.

FOREIGNER continues to tour on a regular basis and recently announced two week-long Las Vegas residencies that will take place early next year at the city's Venetian Resort.