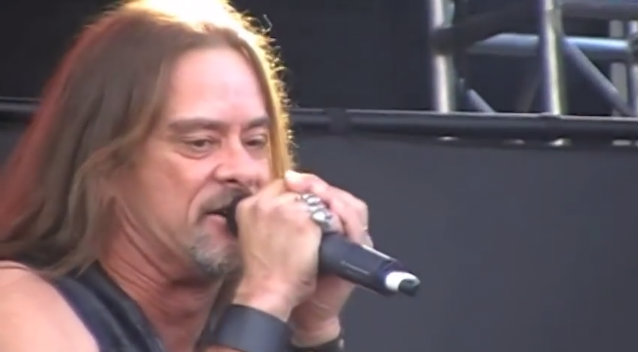 Singer Eric "A.K." Knutson and guitarist Michael Gilbert of Arizona metallers FLOTSAM AND JETSAM were interviewed on the August 22-24 edition of Full Metal Jackie's nationally syndicated radio show. You can now listen to the chat using the Podbean widget below.

FLOTSAM AND JETSAM is preparing to enter the studio to begin work on a new album for a tentative early 2015 release. Asked by Felicity Hall of GetYourRockOut at this year's Bloodstock Open Air festival if the band has begun writing new material yet, Eric "A.K." Knutson said: "We've written a little bit. We have some songs that were actually written for 'Doomsday For The Deceiver' [1986] and 'No Place For Disgrace' [1988] that never made it to the record, and we're pulling those out of the vault and we're gonna try to kind of revamp them and see if we can turn them into something cool."

Eric also spoke about FLOTSAM AND JETSAM's renewed energy and attitude towards the touring lifestyle after only playing sporadic shows and engaging in limited touring activity for many years.

According to Eric, one of the top motivating factors in keeping FLOTSAM AND JETSAM alive more than 30 years after the band's formation is the inspiration his band has provided for so many of the newer artists, many of which acknowledge FLOTSAM as an influence.

FLOTSAM AND JETSAM's current lineup is as follows:

FLOTSAM AND JETSAM returned to Metal Blade Records for the release of the group's 2012 album, "Ugly Noise".