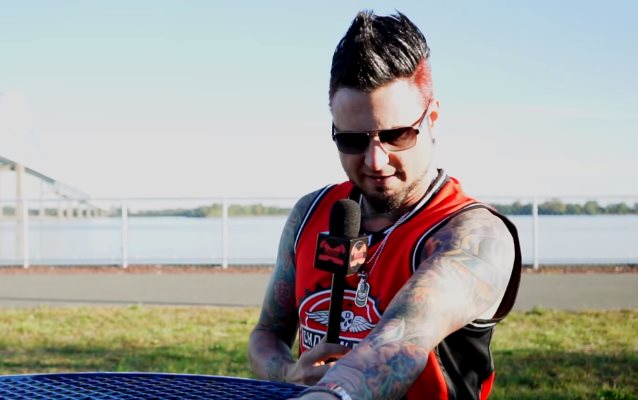 In the latest episode of Louder Noise's "Rock Ink", FIVE FINGER DEATH PUNCH guitarist Jason Hook talks about his tattoos, including several inspired by World War II, and explains how he plans to get a bunch of tats removed.

FIVE FINGER DEATH PUNCH canceled a show in Milan, Italy on Sunday (November 22) amidst rumors that the Islamic State (ISIS) was planning to attack the show as part of a series of multiple attacks spread across several countries.

The hacktivist group Anonymous claimed to have uncovered plots by ISIS for several terrorist attacks to occur on Sunday, including at a pro wrestling event in Atlanta and other locations in Paris, Rome, Lebanon and Indonesia, in addition to the concert in Milan.

The rumors of the attacks came a week after a deadly terrorist attack at seven locations in Paris, including an EAGLES OF DEATH METAL concert where 89 people were killed.

The hacktivists said the information about the fresh attacks was received from "several pro-(ISIS) accounts."

A number of artists halted their European treks in the wake of the Paris attacks, including FOO FIGHTERS, DEFTONES and others.